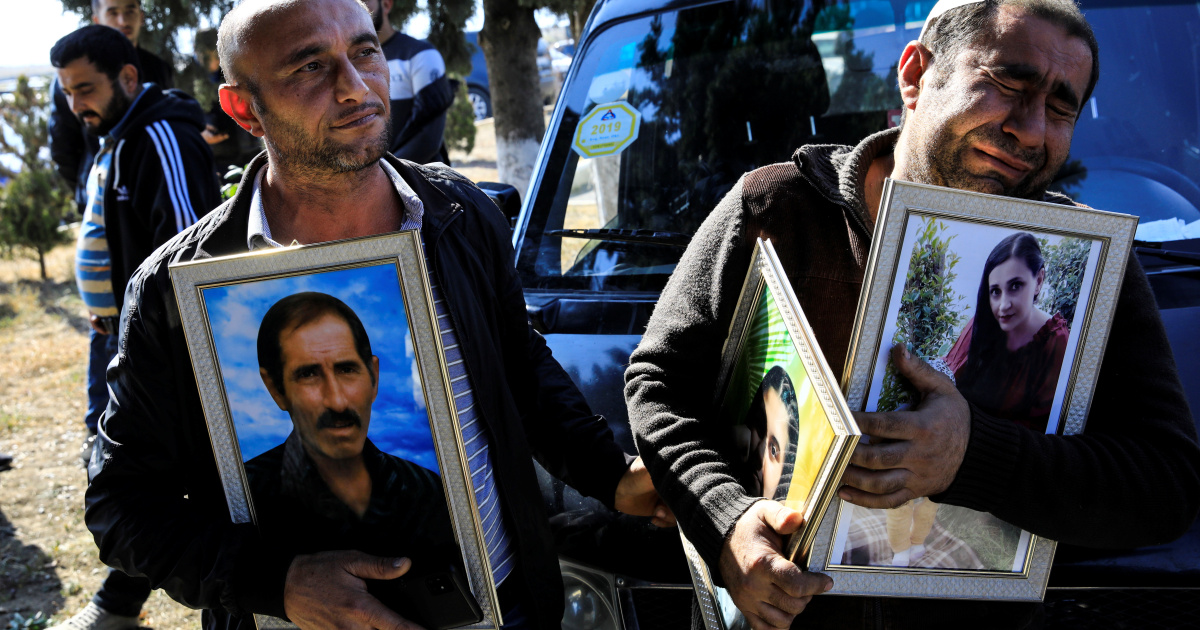 Armenia and Azerbaijan have agreed to a humanitarian ceasefire from midnight, both countries said on Saturday night.

The move came after Azerbaijan said 13 civilians were killed in an Armenian missile attack on its second-biggest city, Ganja. The overnight missile raid also wounded dozens of people in their sleep and destroyed a row of homes.

The Armenian defense ministry denied the claim and accused Baku of continuing to shell populated areas inside Nagorno-Karabakh, including Stepanakert, the region’s biggest city.

Here are the latest updates on the Nagorno-Karabakh conflict:

French President Emmanuel Macron has welcomed Armenia and Azerbaijan’s agreement to a humanitarian ceasefire from midnight and stressed that it should be strictly respected by both parties.

“This ceasefire must be unconditional and strictly observed by both parties. France will be very attentive to this and will remain committed so that hostilities cease permanently and that credible discussions can quickly begin, ”the president’s statement said in a.

Armenia and Azerbaijan have agreed to a humanitarian ceasefire from midnight, the foreign ministries of both countries said in separate statements.

The new agreement was announce following phone calls between Russian Foreign Minister Sergey Lavrov and his counterparts. Lavrov strongly urged the countries to abide by a Moscow-brokered that frayed immediately after it took force.

The two sides trade blame for breaching that deal.

They urged Armenian forces to stop attacking civilians and withdraw their occupying forces from Azerbaijani lands.

A mother and her 16-month-old daughter have been buried in the same grave after a missile attack on the Azerbaijani city of Ganza that killed at least 13 civilians, as fighting intensifies over the disputed of Nagorno-Karabakh region.

Zuleykha Shahnazarova and her daughter Madina Shahnazarli were killed overnight on Saturday, along with the father of the family, Royal Shahnazarov.

The couple’s other daughter, three-year-old Khadija Shahnazarli, survived the attack and was being treated in a hospital in the nearby city of Barda.

“One hit the southwest entrance of the city and the other one – a bit more towards the city center where the most number of the civilian casualties happened,” she said.

“The rescue operation is still ongoing as the body of at least one child is still missing.”

12:00 GMT – Azerbaijan says it is advancing into Nagorno Karabakh

Azerbaijan’s defense ministry has claimed its troops have advanced in various directions across the frontline in the disputed region of Nagorno-Karabakh.

Video shared by the ministry purported to shows air strikes on positions of Armenian forces.

In a televised address, Azerbaijan’s President Ilham Aliyev said the town of Fizuli and several other villages in Azerbaijan have been “liberated”, gaining a “strategic edge.”

Fizuli is one of the seven Azerbaijani regions outside Nagorno-Karabakh that was seized by the Armenian forces during the war in the early 1990s.

Al Jazeera’s Bernard Smith said Armenia is under pressure for losing control of territories it regarded as the buffer zone between Nagorno-Karabakh and Azerbaijan.

“The foreign ministry of Armenia has released a tweet and it says that consistent attempts by Azerbaijan to extend the geography of the conflict, plus irreversibly undermining regional security should be condemned in the strongest terms,” Smith said, speaking from the Armenian town of Vorotan .

“And this is because the leadership of Armenia is under intense pressure. It has lost control of some territory to Azerbaijan, territory that Armenian forces have controlled since the 1994 ceasefire. ”

“Armenia is accusing Azerbaijan of taking this territory militarily rather than the negotiations over which both sides agreed to take part in.”

Armenia is committing a “war crime” and must be held responsible for its “atrocity,” Turkish Foreign Minister Mevlut Cavusoglu wrote on Twitter.

Armenia still commits war crimes & massacres civilians. Kills innocent people incl. children.Silence against this atrocity equals sharing responsibility of these murders. Those who have no humanity will be held accountable for their crimes. Will always stand by brotherly #Azerbaijan.

“We support a humanitarian ceasefire, but Armenia isn’t giving it a chance… they keep targeting residential areas,” Hajiyev said in an online briefing with journalists.

Azerbaijan’s President Ilham Aliyev vowed to strike back against Armenia after shelling on his country’s second largest city Ganja.

Aliyev said Azerbaijan’s army would retaliate against Armenia and “take revenge on the battlefield,” in televised remarks hours after the shelling on a residential area in Ganja flattened rows of houses.

Mushfiq Jafarov, a member of parliament from Ganja, told Al Jazeera stringer Seymur Kazimov that the death toll from the attack on Ganja now stands at 13.

“There are only civilians living here,” he said, adding that two little children were among those killed.

Jafarov said two sites were targeted, with a distance of 5km between them.

08:20 GMT -Civilians in Ganja decry Armenian attack on their homes

The attack on Ganja, which has a population of more than 300,000 people, came only six days after a missile struck another residential part of the city, killing 10 civilians and leaving many on edge.

“Fortunately my family and I were not at home,” Sevil Aliyeva told Al Jazeera stringer Seymur Kazimov. “My house is fully destroyed. I do believe the Azerbaijani army will take our revenge from Armenian forces. ”

“We were sleeping. The kids were watching TV, ”Rubaba Zhafarova, 65, said in front of her destroyed home.

“All the houses around here are destroyed. Many people are under the rubble. Some are dead, some are wounded. ”

Turkish President Tayyip Erdogan told Canadian Prime Minister Justin Trudeau during a phone call that Canada’s suspension of the export of some drone technology was not in line with the spirit of alliance, Erdogan’s office said.

Canada suspended the export of some drone technology to Turkey earlier this month as it probes allegations the equipment was used by Azeri forces involved in fighting with Armenia.

Turkey and Canada are both members of NATO.

Turkey’s military exports to its ally Azerbaijan have risen six-fold this year, with sales of drones and other military equipment rising to $ 77m last month alone before fighting broke out over the Nagorno-Karabakh region, according to exports data.

Ahmad Shahidov, the head of Azerbaijan Institute for Democracy and Human Rights, told Al Jazeera his country was being provoked by Armenia to respond to military attacks.

“Azerbaijan liberated several regions from under Armenian occupation. That’s why the Armenian army moved back to Armenia and fired from its territory to provoke Azerbaijan to destroy these fire points, ”he said.

International law demands the withdrawal of the external troops from Nagorno-Karabakh, he added.

“There are four UN security council resolutions that immediately demand the withdrawal of external troops from Nagorno-Karabakh and the surrounding region.

The overnight attack on Ganja was caused by a Scud missile, said Al Jazeera’s Sinem Koseoglu.

“What we have been hearing from [Azeri] officials is that this is a Scud missile that was fired from Armenian territory, ”she said, speaking from the capital Baku.

Koseoglu said the general prosecutor of Azerbaijan and the minister of state of emergency are in the area trying to understand the impact of this explosion, and to hear from the locals who witnessed the attack.

It’s not an earthquake.

“People say there are still civilians under the rubble, and that the impact of this explosion caused by the Scud missile is large,” she said.

Scud missiles are a series of tactical ballistic missiles developed by the Soviet Union during the Cold War era.

Azerbaijan said 12 civilians were killed and more than 40 were wounded in the city of Ganja due to shelling by Armenia.

There has been no official reaction from Armenia as yet.