Lawyers representing Floyd’s family said that independent medical examiners who conducted an autopsy of Floyd determined that asphyxiation from sustained pressure was the cause of death.

“World renowned medical examiner Dr. Michael Baden and Dr. Allecia Wilson found the manner of Mr Floyd’s death was homicide caused by asphyxia due to neck and back compression that led to a lack of blood flow to the brain. Sustained pressure on the right side of Mr. Floyd’s carotid artery impeded blood flow to the brain, and weight on his back impeded his ability to breathe, “a statement from the lawyers read. “The independent examiners found that weight on the back, handcuffs and positioning were contributory factors because they impaired the ability of Mr. Floyd’s diaphragm to function. From all the evidence, the doctors said it now appears Mr Floyd died at the scene.”

Baden said that what they found was “consistent with what people say. There was no other health issue that could cause or contribute to the death.”

Earlier on Monday, Trump told governors he wanted them to “dominate” protesters, urging the use of more aggressive tactics.

McEnany did not address a question from a report about whether

White House press sec just confirmed Trump had call with Putin today but did not address question about whether he asked him for advice before his call with the governors, as asked by reporter

17:20 GMT – US to send federal assets to help quell protests

The White House on Monday said additional federal assets will soon be deployed to respond to protests across the country over the death of a black man, George Floyd, while in police custody.

The protests had turned violent in some places, which prompted many governors to turn to the National Guard for support. But the protesters have remained undeterred.

President Donald Trump had two briefings on Monday, with Defense Secretary Mark Esper and Attorney General William Barr “and there will be additional federal assets deployed across the nation,” Press Secretary Kayleigh McEnany said at a briefing.

President Donald Trump on Monday derided the nation’s governors as “weak” and demanded tougher crackdowns on protesters in the aftermath of another night of violent protests in dozens of American cities.

Trump makes an announcement about US trade relations with China and Hong Kong as National Security Advisor Robert O’Brien, Secretary of State Mike Pompeo and Treasury Secretary Steven Mnuchin listen in the Rose Garden of the White House in Washington, US, May 29, 2020 . REUTERS / Jonathan Ernst / File Photo [-]

Trump spoke to governors on a video teleconference with law enforcement and national security officials, telling the local leaders they “have to get much tougher” amid nationwide protests and criticizing their responses.

“Most of you are weak,” Trump said. “You have to arrest people.”

Joe Biden will hold a roundtable with several mayors whose cities have been affected by unrest over the weekend.

The presumptive Democratic presidential nominee will hold a virtual event Monday with the leaders of Atlanta, Chicago, Los Angeles and St Paul, Minnesota.

Biden began his day meeting with community leaders at a predominantly African American church in Delaware.

District of Columbia Mayor Muriel Bowser is imposing a 7pm curfew Monday and Tuesday after three days of protests, some of which have turned violent

An 11pm curfew had been in place Sunday night. But the violence still escalated, with protesters setting fires, breaking windows and looting businesses. There were clashes with police, who used pepper spray and other measures to try to break up the demonstrations. 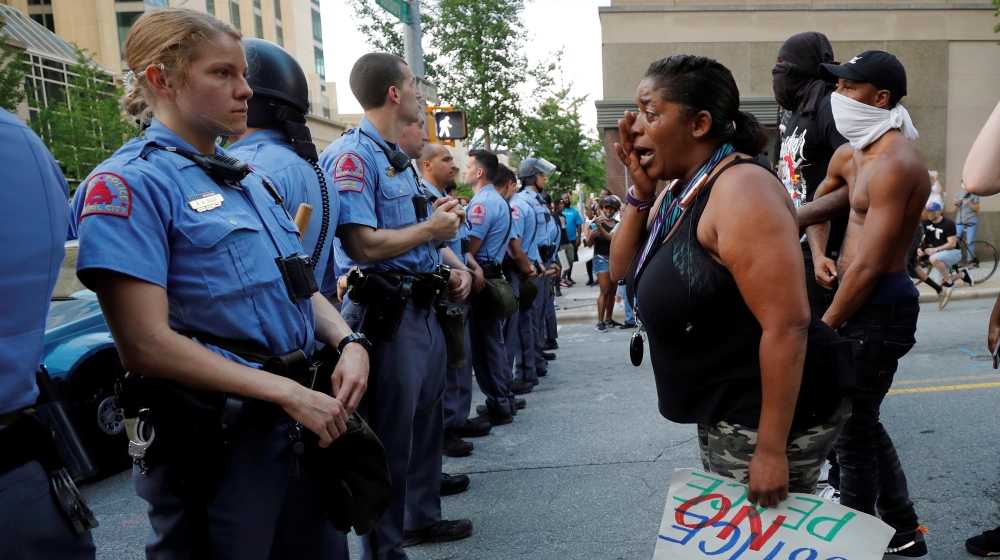 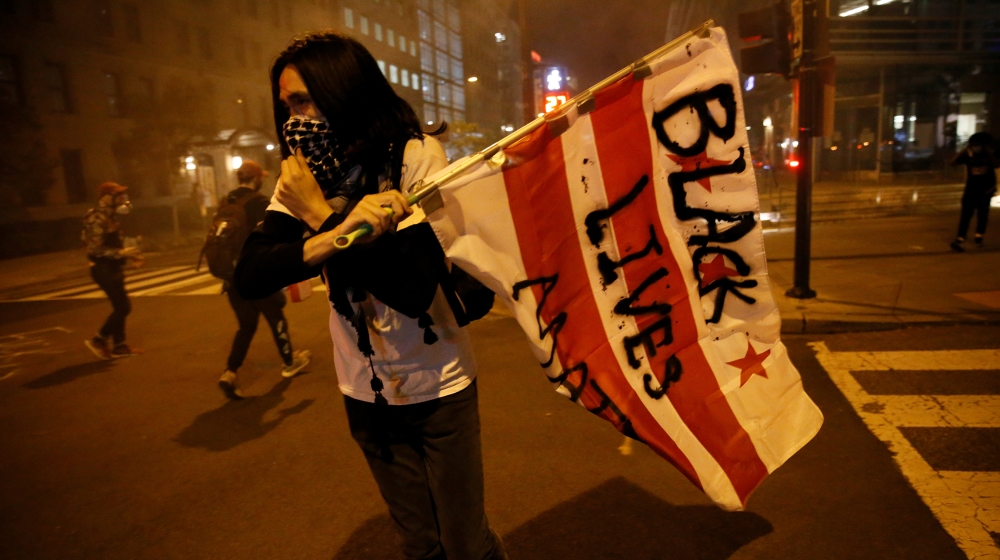 A man holds a flag as police disperse demonstrators during a protest amid nationwide unrest following the death in Minneapolis police custody of George Floyd, in Washington, DC [Jim Bourg/Reuters] 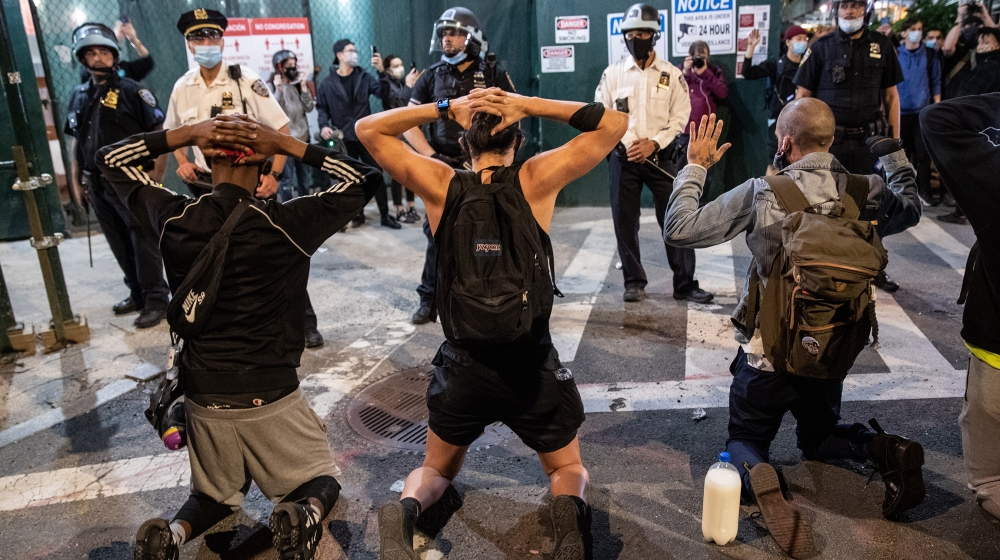 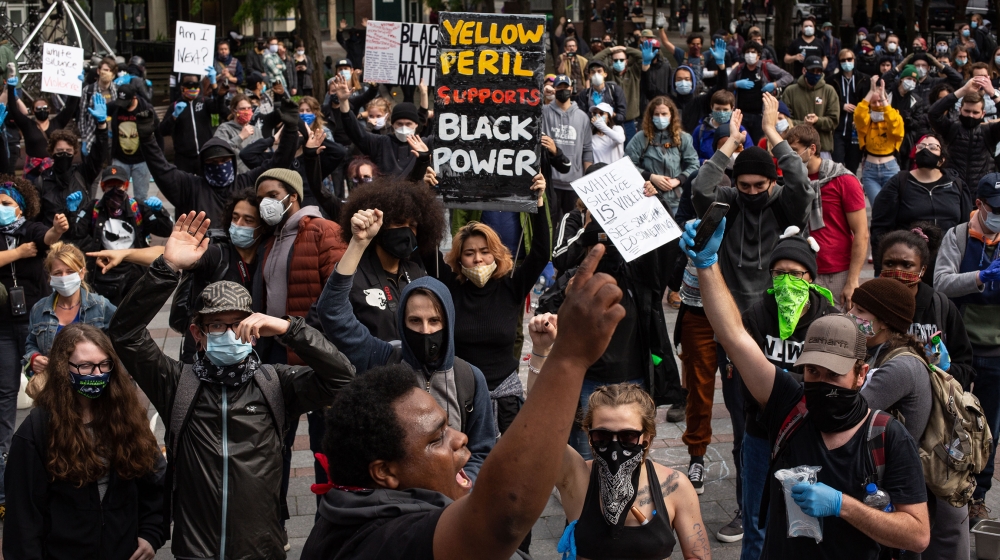 Demonstrators in Seattle, Washington, chant during a gathering to protest the recent death of George Floyd [David Ryder/Getty Images/AFP] 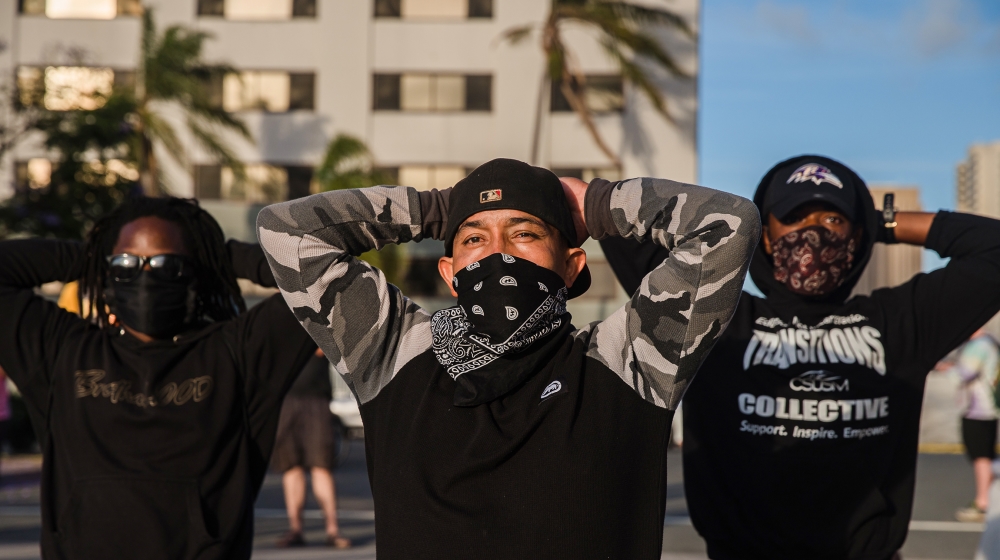 Demonstrators put their hands behind their heads as they stand in front of San Diego Police in San Diego, California [Ariana Dreshler/AFP] 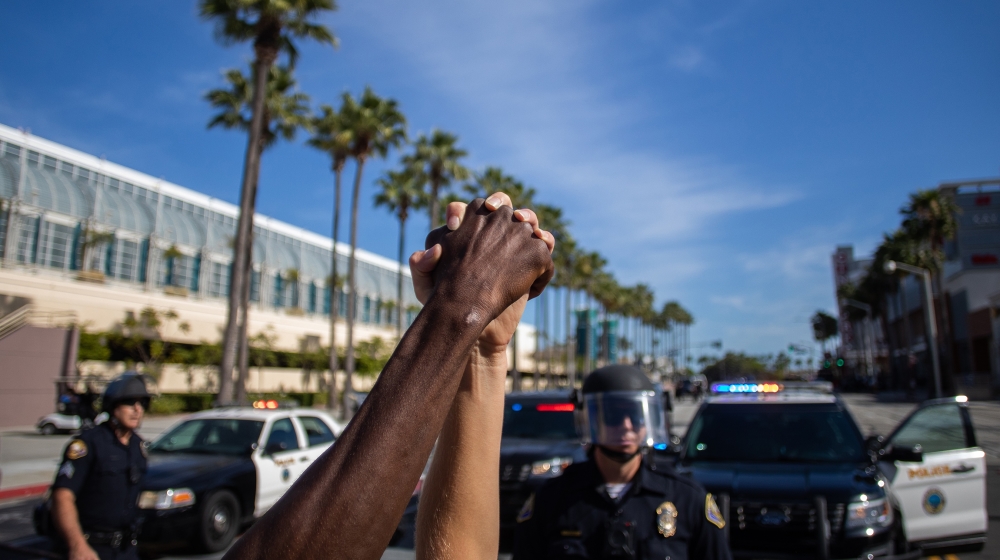 A black man and a white woman hold their hands up in front of police officers in downtown Long Beach, California [Apu Gomes/AFP]

The attorney for George Floyd’s family was set to announce findings Monday of an independent autopsy into his death a week ago after a Minneapolis officer held his knee on Floyd’s neck for eight minutes and 46 seconds.

Floyd, a black man who was in handcuffs at the time, died after the white officer ignored bystander shouts to get off him while also ignoring Floyd’s cries that he couldn’t breathe. His death, captured on citizen video, sparked days of protests in Minneapolis that have spread to cities around the US.

An official autopsy last week said the combined effects of being restrained, potential intoxicants in Floyd’s system and his underlying health issues, including heart disease, likely contributed to his death. There were no other details about intoxicants, and toxicology results can take weeks. In the 911 call that drew police, the caller described the man suspected of paying with counterfeit money as “awfully drunk and he’s not in control of himself.”

The criminal complaint noted that the medical examiner’s report was preliminary, but said the autopsy “revealed no physical findings that support a diagnosis of traumatic asphyxia or strangulation.”

Authorities say the driver of a semitrailer that rolled into the midst of thousands of people marching on a closed Minneapolis freeway in protest over the death of George Floyd has been arrested on suspicion of assault.

Authorities had said it appeared no one was hurt Sunday, but some witnesses said a handful of people who were on Interstate 35W near downtown Minneapolis sought medical attention on their own. Authorities said they could not confirm that. 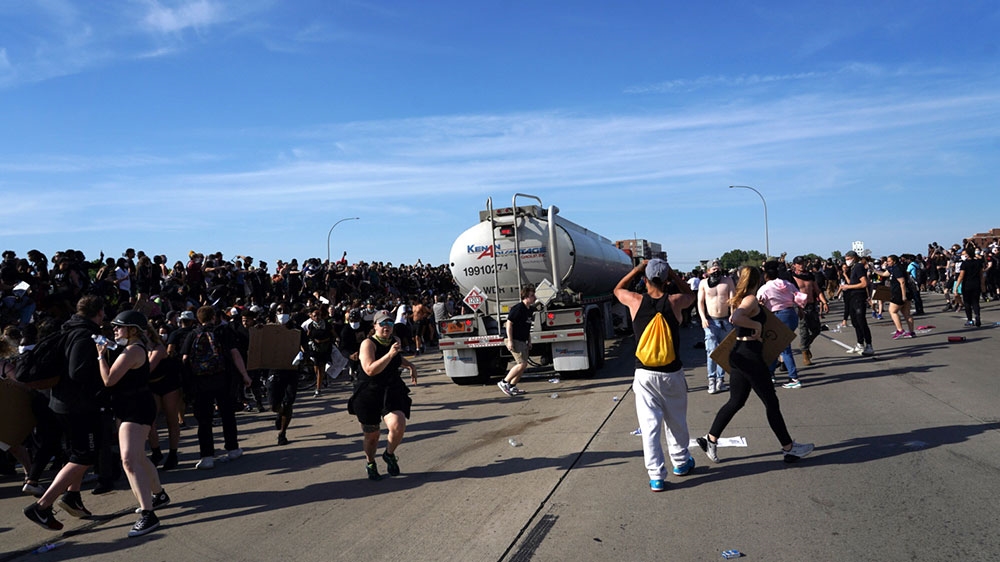 A truck that was driven into a rally protesting the death of George Floyd on the I-35W bridge in Minneapolis, US [Go Nakamura/Reuters]

The freeway was among many shut down in the Minneapolis area for the second night in a row as officials imposed an 8pm curfew and sought to make it more difficult for protesters to move around.

Bystander video showed the crowd parting seconds before the semi rolled through, then the tanker truck gradually slowed and demonstrators swarmed the truck.

Public Safety Commissioner John Harrington said Sunday that it initially appeared from traffic camera footage that the semitrailer was already on the freeway before barricades were set up at 5pm. State Corrections Commissioner Paul Schnell said at a later briefing, however, that the truck went around a traffic barrier to stay on the road.

James Slack said Monday that “journalists all around the world must be free to do their job and to hold authorities to account without fear of arrest or violence.”

He said the violence of the past few nights was “very alarming”, and noted, “people must be allowed to protest peacefully.”

Slack said, “The footage of George Floyd’s death was deeply distressing and our thoughts are with all those who have been affected.”

Noting that a police officer has been charged with murder, he said “we would hope and expect justice to be done.”

The police chief of Louisville, Kentucky, says police officers and US National Guard soldiers enforcing a curfew in Louisville killed a man early Monday when they returned fire after someone in a large group fired at them first.

Louisville Metro Police Chief Steve Conrad confirmed the shooting happened around 12:15 am outside a business on West Broadway, where police and the National Guard had been called to break up a large group of people gathering in defiance of the city’s curfew.

Someone fired a shot at them and the officers returned fire, the chief said. It was unclear whether the person killed is the one who fired at the law enforcers, he said.

Protests have erupted in Louisville over the shooting death of Breonna Taylor, a 26-year-old emergency medical technician who was shot eight times by narcotics detectives who knocked down her front door, as well as the death of George Floyd.

Hello and welcome to Al Jazeera’s continuing coverage of the protests in the US over the deadly arrest of George Floyd in Minneapolis, Minnesota. This is Laurin-Whitney Gottbrath in Louisville, Kentucky.

Here are a few things to catch up on: