In an effort to clean up the city, community-based volunteers and others have descended on south Minneapolis nearly every morning since demonstrations against the death of Geroge Floyd in police custody began on Tuesday.

While protests have largely started each day peacefully in major cities nationwide, some have turned violent as night fell with vandalism, looting and fires, leaving small pockets of destruction in their aftermath.

Stark, along with hundreds of volunteers – some with his group, some showing up on their own – have picked up debris and used snow shovels to clear water, which had gathered when the sprinklers went off in buildings set on fire.

Some have participated in protests, while others have used the clean-up effort to support the protesters and do their part.

“And as much as I’d love to show my support, I did not know how, and this I know how to do,” she said speaking of the clean-up effort. “[I’m] Just trying to make it look a little more put together – show that we as a community can pick up some of this and give our city a little bit of rise up that things are gonna get better. “

Floyd died on Monday after being pinned down by a white police officer’s knee for nearly nine minutes while pleading: “I can’t breathe.”

A woman posing for a photograph with name of George Floyd written in chalk on the ground in Minneapolis, Minnesota [Lucas Jackson/Reuters]

That officer – Derek Chauvin – has been charged with third-degree murder and manslaughter. The three other officers involved have not been arrested, angering protesters.

The protests have since spread to more than 100 cities nationwide, with protesters marching against Floyd’s death and other acts of police violence.

In Minneapolis, there have been efforts to protect community-owned businesses, but some have been destroyed, particularly on the city’s well-known Lake Street corridor, which is lined with immigrant-own restaurants, bakeries and markets. The street was believed to be hit so hard because it is in the same area where the officers involved in Floyd’s death were based.

Some residents have told local media they are devastated by the loss of their business, but they also support protesters and are angered by Floyd’s death. 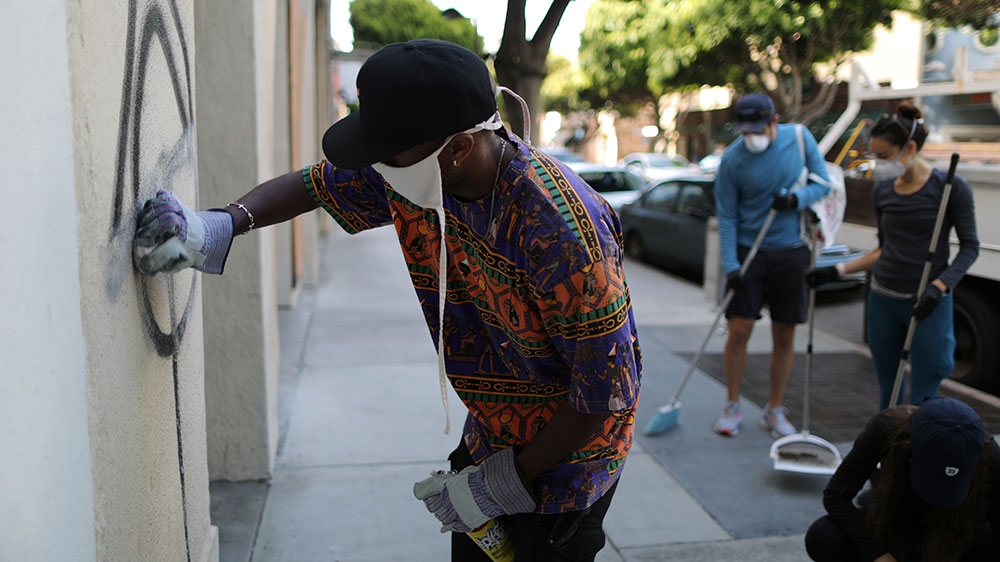 “I think there’s a lot of anger. I don’t personally know how smashing something solves it, but if it gets people talking about it, unfortunately, our society does show riots more than they show peaceful protesting,” Alex said. “I wouldn’t support it, but I can do what I can to support the people in my community.”

More than $ 2.4m has been raised to help those businesses rebuild, according to Lake Street Council, which set up a fund which will go directly to small businesses and nonprofits to help rebuild their storefronts, reopen their businesses and serve the neighborhoods.

“It will take millions of dollars to rebuild, and over 27,000 people have chipped in to make that a reality,” the ground said on its website.

For Stark, and many others on Lake Street earlier this week, the efforts are not just about one day. Stark says he lived and worked in Ferguson when Michael Brown, an unarmed Black 18-year old who was killed by police in 2014, and does not see an end to the demonstrations any time soon.

He expects more damage, but does not let it deter him. “You always gotta love, right?” he said. “Always gotta love people, so whatever is needed, we’ll wake up, and we’ll do it.”

US: Minneapolis honors George Floyd by serving those in need | USA News

‘This is not who we are’ write Minneapolis officers: Live updates | George Floyd protests News