“They are willing to arrest thousands to avoid arresting four people,” said Ahnor Kelly, 25, who rallied with thousands of others outside the Minnesota governor’s residence late on Monday.

“They’re willing to use more tax money to bring out the national guard than to give people health equity, such as protective gear and testing,” Kelly told Al Jazeera.

In the week since Floyd’s death on May 25, prosecutors have decided to charge only one officer – Derek Chauvin – who knelt on Floyd’s neck for nearly nine minutes, during more than two minutes of which, video showed, Floyd lay motionless. Chauvin was charged on Friday with third-degree murder and second-degree manslaughter.

But protesters, Floyd’s family and community leaders want the other three officers involved to be arrested as well.

“In the next 10 minutes, we want Governor Tim Walz and the chief of police to arrest the rest of the officers,” said one speaker at Monday’s rally at the governor’s residence in St Paul, which neighbors minneapolis.

Kelly added that “this [mass protests] will stop if they arrest those four officers “but” until they do that, this is going to continue to happen. “

Monday’s rally came just hours after separate autopsy reports released by independent and county medical examiners agreed in ruling Floyd’s death was a homicide, but they differed in part on the cause.

The private autopsy, obtained by Floyd’s family, found that the 46-year-old died of asphyxiation due to neck and back compression by police, according to the Floyd family lawyers.

The Hennepin County Medical Examiner found that Floyd “experienced a cardiopulmonary arrest while being restrained by law enforcement officer (s)”. It said Floyd suffered “other significant conditions”, including heart disease and hypertension, fentanyl intoxication and recent methamphetamine use.

“[We] Don’t need a doctor to tell us that you know you clearly saw it on TV, “said Justin Pritchard, who attended Monday’s demonstration.

Floyd’s death has sparked worldwide protests in solidarity with the demonstrators out in more than 120 US cities, according to an Al Jazeera tally.

Although the protests have at times descended into violence with looting, vandalism and fires, especially as night falls and curfews kick in, they have remained largely peaceful, characterized by loud, unified chants of some of Floyd’s last words “I can’t breathe” , and “no justice, no peace”.

Still, National Guard troops have been called in, thousands of arrests have been made, and police have responded with tear gas, rubber bullets, and flashbangs, including on many demonstrating peacefully.

More than 2,000 gathered outside the Minnesota governor’s residence on Monday evening, listening to speakers and community leaders.

“If you never stop fighting, guess what will happen eventually?” asked Mel Reeves, a journalist and activist, of the crowd. 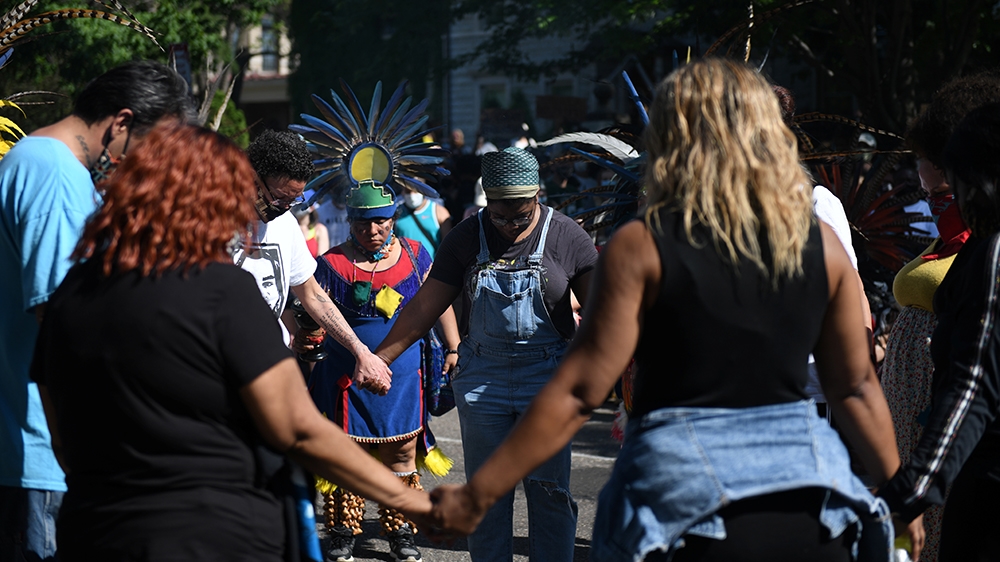 The protesters then marched through the streets, chanting “Say his name! George Floyd!” and “What do we want? Justice!”

“I’m sad for my city,” said Minneapolis resident Brendon Smith, who also marched for Philando Castile and for his “best friend” Jamar Clark, both unarmed Black men killed by police in Minnesota in recent years.

Justin Pritchard, 35, who used to live near the intersection where Floyd died, said that as a Black man, he has had to rethink even doing the simplest of tasks.

“I don’t even want to exchange money any more cause that could have happened to me, you know. Somebody could have gave me a fake $ 20,” Prichard said, referring to the fact Floyd was stopped by police for allegedly attempting to use a counterfeit $ 20 bill.

Pritchard agrees that not much has changed in the week since Floyd’s death, but he remains hopeful.

“It’s great, all the support,” he told Al Jazeera. “But as far as change, I don’t think much has changed now, but I’m optimistic that it will.”