The annexation of illegal Jewish settlements in the occupied West Bank, as well as the strategic and fertile Jordan Valley, could begin as early as July 1, Israeli government says.

While the details of the annexation plan remain vague, recently reinstalled Prime Minister Benjamin Netanyahu stated his intention to annex the Jordan Valley while on the campaign trail last year.

Since then, the United States has proposed its own Middle East plan that envisions Israel applying sovereignty to the illegal settlements in the occupied West Bank, and Netanyahu has since reaffirmed his pledges.

Many countries, as well as the United Nations and the European Union, have warned against such a move, noting that unilateral annexation would breach international law and would be a devastating blow to the prospects for a two-state solution to the Israeli-Palestinian conflict .

The EU’s foreign policy chief said in May the bloc would use “all our diplomatic capacities” to try to dissuade Israeli government from moving ahead with the plan.

The Palestinian Authority has rejected the US proposal and recently said it considers all agreements signed with Israel and the US to be null and void.

Unilateral annexation of territory is strictly prohibited under international law without exception. But while the EU is united in its opposition to annexation, it remains divided over what steps to take, meaning its response has been limited to rhetoric and condemnations.

A similar scenario occurred in 1980 when Israel annexed occupied East Jerusalem and subsequently the occupied Syrian Golan Heights in 1981.

The UN Security Council indicated it was going to implement economic and political consequences for Israel, but it did not follow through.

Four decades later, the international community continues to debate how to respond to Israeli plans of annexing about one-third of the occupied West Bank.

“We wouldn’t be here in 2020 debating this if firm lines in the sand had been drawn in 1980 and in 1981,” Michael Lynk, UN special r, on the situation of human rights in the occupied Palestinian territories, told Al Jazeera.

“Israel has learned an undeniable lesson with respect to impunity – that the international community will pass resolutions against annexation, will adopt decisions with respect to illegality with building of settlement enterprises, and yet the international community will do virtually nothing as a consequence to Israel, so it can, in fact, have its cake and eat it too, “Lynk said.

Israel has been in non-compliance with more than 40 Security Council resolutions, and about 100 UN General Assembly (UNGA) resolutions.

In 2018, Lynk urged the international community to take action to stop Israeli impending annexation of the occupied West Bank.

Lynk reiterated in his 2019 annual report (PDF) to the UNGA that the international community has a legal obligation to ensure international law is obeyed by its members.

Yet, Israel has enjoyed impunity over the decades, despite serious violations of international law because of an absence of international political will to impose “any meaningful accountability”, Lynk wrote.

The international community had previously shown it is capable of responding to illegal annexations when it quickly imposed economic sanctions and diplomatic measures after Russia captured and annexed Crimea from Ukraine in 2014.

Russia found itself removed from the G8, its application to the OECD was stalled, import and export bans were placed on Crimea, and individuals involved in the annexation were hit with diplomatic negotiations and asset freezes.

The measures are ongoing and have been extended until June 2020, despite Russia being a major trading partner for Europe and a key player in international politics.

Lynk noted Israel has a much smaller impact on the global and European economy.

“[The EU] actually has the ability to put diplomatic accountability measures on Israel to make sure either it reverses its annexation decision, or it realises that there’s gonna be an ongoing price to pay for staying on the course of annexation, “Lynk said.

“Yet the EU appears to be quite divided in its own house about what to do.”

Instead, relations between the EU and Israel have only strengthened.

Trade between the two reached record figures in recent years. In 2017, Israeli exports of goods to the EU reached 34 percent of its total exports.

Nearly 40 percent of all Israeli imports are from the EU, its largest trading partner.

The US has also increased aid to record levels. In 2016, near the end of former US president Barack Obama’s term in office, the US agreed to provide Israel with a record $ 38bn in military aid over the next decade, a sum that Netanyahu called “historic”.

Diana Buttu, a Haifa-based analyst, told Al Jazeera that Israeli plan for annexation is viewed as “the icing on the cake” as there have been no consequences for its illegal behavior for the past 53 years of occupation, which include expanding illegal Israeli settlements, implementing a dual system of law, preventing Palestinians from access to natural resources, and bombing the Gaza Strip.

“We’ve seen over the years that Israel is getting even more international support from countries around the world,” Buttu said.

Buttu said the reason why the international community has turned a blind eye is because of “the fact that Israel is a colonial project”.

“The Arab world has never had self-determination. It’s never been an area where we haven’t had some type of colonial power in place,” Buttu said.

“There is the ability to affect change. Russia is much more powerful than Israel is. But there is no political will to do so, and that is the real difference.”

The international community has done little in the case of Israeli annexation proposal as Israel has run “a very astute international campaign” and has a “tough” diplomatic service, according to Lynk.

“It has, of course, backing by major pro-Israel groups in the US that have substantive political sway in Washington and elsewhere,” Lynk said.

The Trump administration is known to have strong ties to Netanyahu’s Likud party.

In May 2018, the US moved its embassy to Jerusalem from Tel Aviv, reversing decades of US policy. In March 2019, it recognized Israeli annexation of the occupied Syrian Golan Heights. 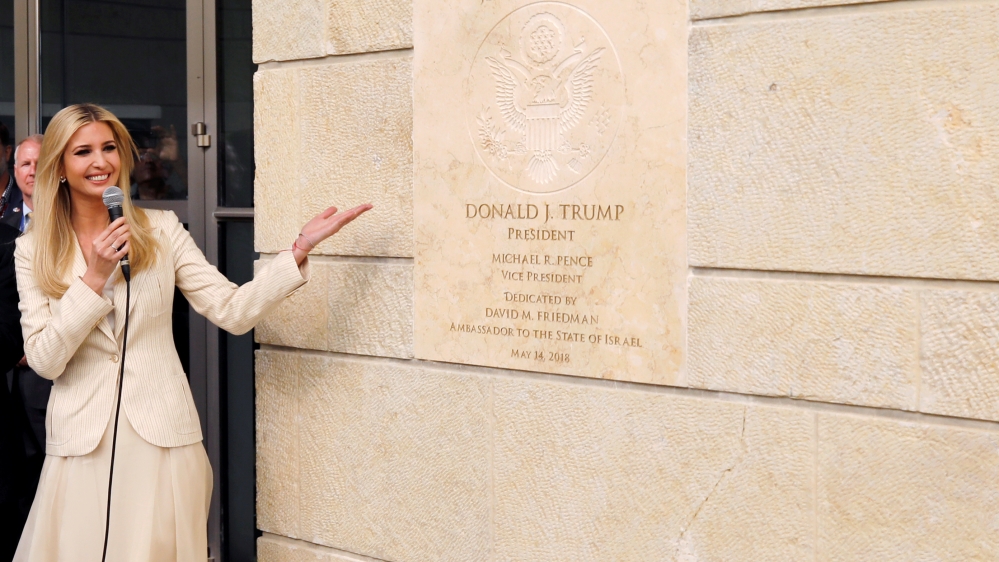 Ivanka Trump speaks at the opening of the new US embassy in Jerusalem on May 14, 2018 [File: Ronen Zvulun/Reuters]

In June 2019, the US slashed its contributions to UNRWA, the UN agency for Palestinian refugees, to zero and excluded funding to the Palestinian Authority (PA) in February, reportedly in an attempt to pressure Ramallah to change its position on the annexation plan.

“An international state, like the US, has an obligation to isolate human rights violators, not to end up abetting them,” Lynk said.

“What we see is the Israeli government and Republican Party being shrewd and realizing there may be a chance that the current American administration may not be re-elected in November, so now is the closing window to fulfil probably the biggest American gift to Israel, by endorsing the annexation of parts of the West Bank and protecting Israel against any diplomatic fallout. “

Critics have compared the US and Israeli vision of a Palestinian state to the bantustans in South Africa under the apartheid regime.

Lynk described the plan as a “disconnected array of 165 or so separate islands of territory” and the two-state solution as a “corpse that’s simply awaiting its funeral”.

If Israel does go ahead with annexation, it will create a state with two distinct tiers of political, economic, social and property rights amounting to apartheid, Lynk said.

“When the dust settles … the world will realise that there’s only one state that’s operating between the Mediterranean and the Jordan river – and that is Israel.”