True to form, a maskless Brazilian President Jair Bolsonaro rode a police horse through a crowd in Brasilia this weekend, shaking hands with supporters, again dismissing social distancing and other measures in place to stem the spread of the novel coronavirus, which has killed at least 31,000 and infected more than half a million.

The scene followed similar incidents in the weeks prior.

“So what?” Bolsonaro said in May when asked by a reporter about Brazil’s mounting coronavirus fatalities.

“I’m sorry but what do you want me to do about it?”

Bolsonaro, a former army captain who has dismissed the virus as the “little flu”, has pushed back against social isolation measures mandated by state governors, and called for the wider use of antimalarial drugs to treat COVID-19, in defiance of public health experts warning of their possible health risks.

He has continued to maintain that protecting Brazil’s economy is the most important consideration, despite widespread domestic and international criticism of his handling of the outbreak – and a rising rising death toll.

His open defiance has led to the loss of two health ministers – one was fired, the other resigned, after they openly disagreed with the far-right leader about how to combat the spread of the coronavirus pandemic.

Experts have said the two sudden changes in leadership in the health ministry, compiled with Bolsonaro’s continued opposition to lockdowns is already having devastating consequences on Brazil, a vast, developing nation with widespread poverty, and an underfunded public health system.

“The two ministers were focused on implementing health policies that are in line with public health guidance from the World Health Organization (WHO), as well as from Brazil’s own epidemiologists and experts,” said Anya Prusa, senior associate at the Brazil Institute in the Wilson Center.

“But they ran into a government and a president who was not interested in crafting policy based on health guidelines,” Prusa told Al Jazeera. “He is a president that is focused on the economy with the exclusion of all else.”

Last week, a University of Washington study warned that Brazil’s death toll could surge to 125,000 by early August, and urged the country to impose stricter lockdowns to reduce the rate of transmission.

“Brazil must follow the lead of Wuhan, China, as well as Italy, Spain, and New York by enforcing mandates and measures to gain control of a fast-moving epidemic and reduce transmission of the coronavirus,” said Christopher Murray, the director of the university’s nstitute for Health Metrics and Evaluation (IHME).

“Until then, IHME is forecasting the death toll in Brazil will continue to climb, there will be a shortage of critical hospital resources, and the peak of deaths may not occur until mid-July,” said Murray.

The dire warnings are only compounded by a public health system that has been underfunded and strained for years. Health experts say that with the number of cases and higher demand for Intensive Care Unit (ICU) beds, it will be very challenging for hospitals to cope.

Brazil’s universal health system provides free care for the majority of its 212 million citizens. But the sprawling system is severely under-resourced and offers uneven health services across the country.

“We have a system where everybody has a right to health, everybody has rights to some healthcare services, but because of underfunding, the distribution is absolutely unequal,” said Miguel Lago Executive Director, Institute for Health Policy Studies.

“It is unequal geographically and in terms of social class,” Lago added.

Lago said that more than half of the population live in regions where there is an insufficient number of ICU beds – crucial in the treatment of severe cases of COVID-19.

Coronavirus infections in Brazil were first restricted to wealthy neighborhoods and large cities in close contact with international travelers, but experts say, the virus has more recently made its way to poorer and more isolated areas – to devastating effects.

“COVID in Brazil came through the penthouse, but nowadays it is going through the dungeons,” said Ana Maria Malik, a professor at the Faculty of Medicine at the University of Sao Paulo.

“The heterogeneity of the country means that people are going to die simply because they are poor or because they live in states where there is no infrastructure,” Malik said during an online panel discussion on Brazil’s healthcare last week. 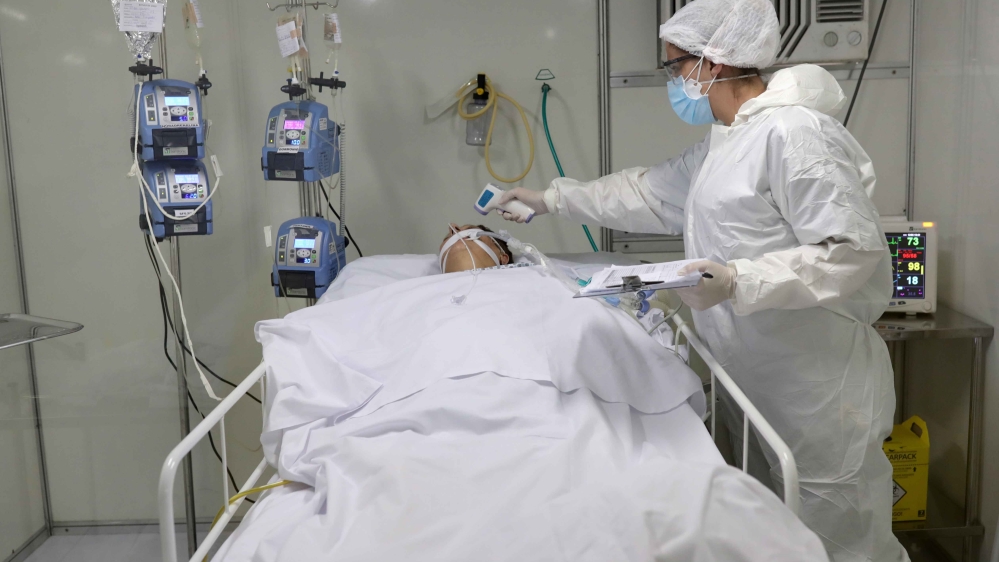 A patient suffering from the coronavirus disease being treated in the Intensive Care Unit at a field hospital in Guarulhos, Sao Paulo state, Brazil [Amanda Perobelli/Reuters]

In the more isolated regions of Brazil, such as in the state of Amazonas, residents rely on philanthropic hospitals that are run by churches or charities.

While the private healthcare sector – which treats millions of patients a year albeit mostly in large cities and more affluent parts of the country – is better equipped, it also has become inundated with coronavirus patients, straining hospitals and staff.

“We do have some idle capacity, but not much,” Velasco said during an online panel discussion on Brazil’s healthcare last week.

“All the ICUs are at 80-85 percent [capacity], and in cities like Rio it is at 90 percent, it means that there are no beds, that there is a waiting list for people to get into the ICU, “he said.

Experts warn the situation will likely only get worse as states relax lockdowns and stay at home orders.

Malls, shops and real estate operations were allowed to operate for 15 days on Monday as part of phase two of the reopening plan in the city of Sao Paulo, Brazil’s largest city and the hardest hit city by COVID-19 infections.

Observers said Sao Paulo, the country’s financial hub has been facing growing pressure to allow businesses to reopen after two months of loosely enforced quarantines have taken a toll on the economy.

The city’s mayor, Bruno Covas said the city met all the state’s criteria to move forward with relaxing restrictions and the move will be based on clear protocols on hygiene measures and testing.

He added that the city could only progress through the next reopening stages if the indicators hold for 14 days.

“If the numbers worsen, we can go back to phase one,” Covas said in a news conference on Thursday. 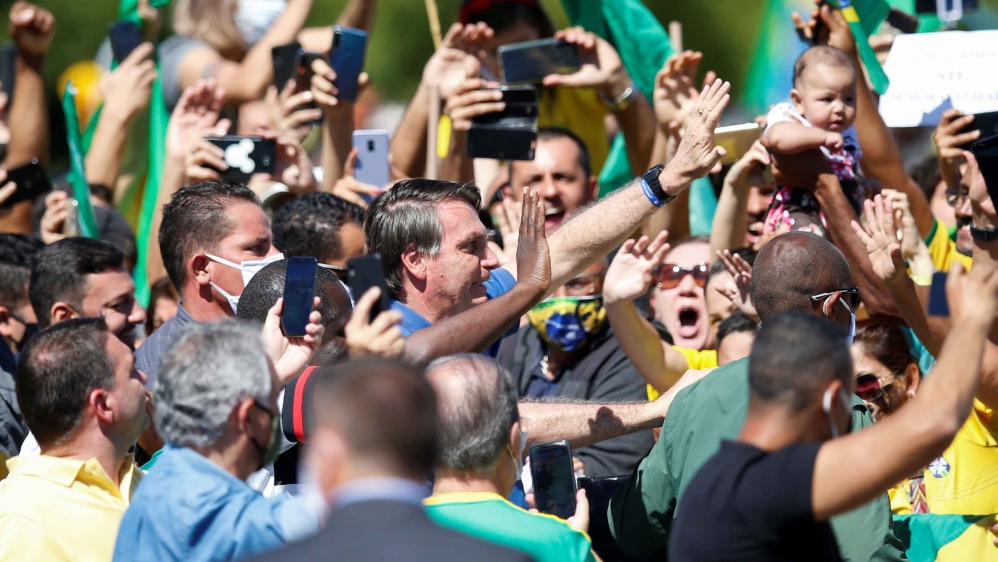 Last week, the WHO declared that the Americas had become the new global epicentre of the virus, warning Brazil would not be seeing the pandemic’s end anytime soon.

“Now is not the time for countries to ease restrictions,” Carissa Etienne, WHO director for the Americas said during a videoconference.

Filipe Carvalho, a Brazil analyst with the Eurasia Group, said plans to reopen come after local leaders faced great difficulty in coordinating the response to the epidemic and in the absence of a stable team with a national plan.

Carvalho said with the two leadership changes and a president at the helm who refuses to abide by health expert recommendations on social distancing let alone promote them, local leaders faced an uphill battle in imposing lockdowns – leading to a conflicting image about the dangers of the virus and eroding compliance with quarantine measures.

“The danger is that you would increase very abruptly the strain on the healthcare system and states are forced to shut down again,” Carvalho told Al Jazeera. “They would have this unpredictable stop and go scenario where cities open but need to pull back again because the numbers rise too quickly again.”