Minneapolis, Minnesota, USA – The intersection where George Floyd was killed on May 25 has during the last week become a space for reflection, mourning and the honoring of the 46-year-old Black man, who died after a white officer knelt on his neck for nearly nine minutes as he called out, “I can’t breathe.”

In many ways, the atmosphere at the site on Wednesday felt the same as all the other days. Music filled the air. A few people danced. Small children played. But the heaviness that has been hanging around the intersection for the past week felt a bit thicker on Wednesday than it had felt before.

“No man or woman should be without their father,” Quincy Mason told the crowd.

Civil rights lawyer Ben Crump and George Floyd’s son, Quincy Mason Floyd, react as they visit the site where he was taken into police custody, in Minneapolis, Minnesota [Lucas Jackson/AFP]

Benjamin Crump, the prominent civil rights lawyer who is representing the family, stood by Quincy Mason’s side, urging the arrests of all four officers involved in Floyd’s death before Thursday, when the city is set to hold a public memorial.

“Not one minute, not two minutes, not three minutes,” Crump shouted out, referencing the time Floyd’s neck was pinned to the ground. By the time he reached “almost nine minutes,” the crowd chanted along with him. “Eight minutes and 46 seconds George Floyd begged for air.”

“We cannot have two justice systems in America – one of Black America and one for white America,” Crump said.

“Change is going to come in the tragic killing of George Floyd,” he added. “That change starts today.”

Moments after Crump and Mason left the area, someone in the crowd yelled, “They got all four!” 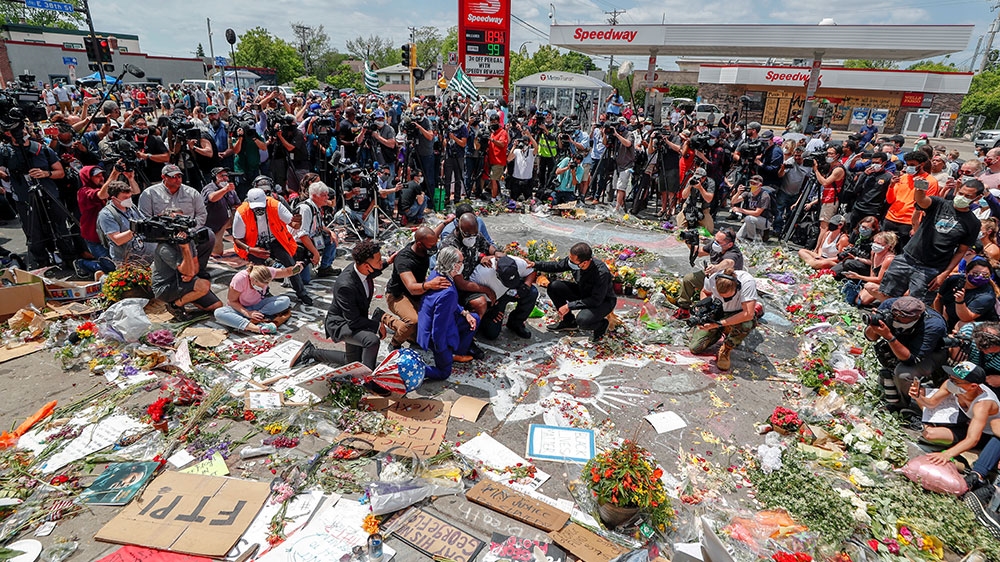 Terrence Floyd visits the site near where his brother George died in Minneapolis police custody in Minneapolis, Minnesota [Eric Miler/Reuters]

News had surfaced that prosecutors decided to upgrade the charges previously announced against Derek Chauvin, the now-fired officer who knelt on Floyd’s neck. They also announced charges against the three other fired officers involved.

Following the news, the heaviness of the day turned noticeably lighter, a collective sigh of relief from the crowd.

“I feel very very happy that they decided to charge them,” said Williametta Jallah, who used to live in the neighborhood.

“Justice should prevail,” she said, as cheers rung out.

“I got really excited because, honestly, we never do get justice out here,” Tati Ampah said. “For me, as long as they do get jail time, and as long as they do like understand that they did something wrong and that one of them could have jumped in and stopped a man from dying.”

‘It should have been first-degree murder’

Chauvin, who has been in custody since Friday, had his third-degree murder charge increased to second-degree. He is also charged with second-degree manslaughter.

The three other officers – Thomas Lane, J Kueng and Tou Thao – were charged with aiding and abetting second-degree murder and second-degree manslaughter. 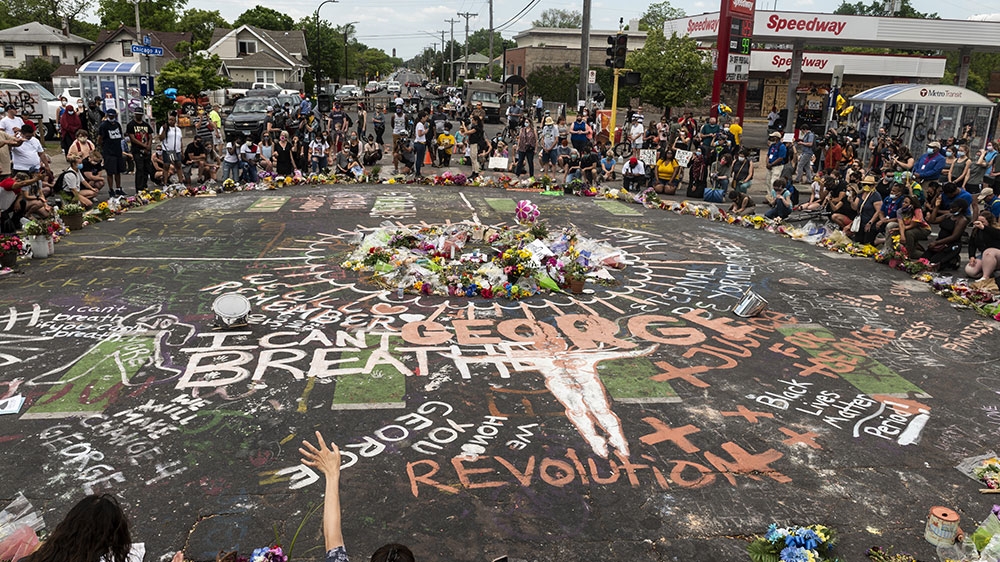 People gather at site where George Floyd died on May 25 while in police custody in Minneapolis, Minnesota [Stephen Maturen/Getty Images/AFP]

As initial news settled in, many at the memorial on Wednesday said the upgrade to the murder charge was not enough.

“Am I happy? No” said Tiffany, who flew out to Minneapolis from New York City on Monday. She acknowledged that “progress” was being made, but said Chauvin should have been charged with first-degree murder instead. It was a call made by Floyd’s family, as well.

In announcing the new charges on Wednesday, Minnesota Attorney General Keith Ellison noted that “you have to have to have premeditation and deliberation to charge first-degree murder”.

He added that “history shows that there are clear challenges here” in prosecuting police officers.

“I strongly believe that these developments are in the interest of justice for Mr Floyd, his family, our community and our state,” Ellison said.

Others at the memorial site were skeptical that the charges would result in convictions.

“You gotta look at it from the eyes of a Black man,” he told Al Jazeera. “It sucks. To come in contact with the same people who are supposed to serve and protect you. They got the serving part down pat. They served the s *** out of [him]. “

“We got a charge; we need a conviction,” the crowd yelled.

“I have hope,” Jallah, the Minneapolis resident who used to live in the neighborhood, said.

Self-described KKK leader charged for driving into US protesters | News