Minneapolis, Minnesota, US – A pop-up food pantry; a tagger who covers up profanity; an abandoned hotel that takes in homeless individuals and protesters. In between the news headlines that have thrust Minneapolis, Minnesota, into the United States national spotlight is a community that has come together to honor George Floyd by helping those in need.

Rows of tents flanked by piles of donated food, hygiene supplies, first-aid supplies and other goods line a field in Saint Paul, which neighbors minneapolis, the city where Floyd was killed in late May.

The pop-up food pantry was started in the wake of the police killing of Floyd. The 46-year-old Black man died on May 25 after a white police officer knelt on his neck for nearly nine minutes as Floyd repeatedly pleaded, “I can’t breathe”, before going motionless.

The killing set off protests in Minneapolis and across the country, calling for justice for Floyd and an end to police brutality. As anger exploded, some of the protests turned violent, with fires, looting and vandalism. Some local businesses were hit. Others were already under strain from coronavirus lockdowns that had been in place for months.

“People are hurtin because of George[‘s] situation … And if George Floyd would have had justice from the beginning our stores would be up. If politicians, and lawmakers, and the legal world would take our lives seriously, this wouldn’t happen, “said Shay Webbie, a local comedian, who started the Saint Paul pop-up food pantry.

What started as one tent with two tables now covers an entire field with more than a half dozen tents and trailers. Similar initiatives can be seen across Saint Paul and Minneapolis.

Hundreds of volunteers help with the Saint Paul food pantry – known on Facebook as ShayCares – and anyone in need can pick up supplies, no questions asked.

“It’s like watching your baby grow up and graduate,” said Webbie with tears in her eyes as she looked out over the field.

A woman distributes free food, essentials and water to the protesters at the makeshift memorial in honor of George Floyd in Minneapolis [Chandan Khanna/AFP]

Kim Peter, 52, who moved into the neighborhood when she was five years old, came with her sister to get supplies for their elderly mother, who is on a fixed income.

She told Al Jazeera that seeing how the community has come together made her feel “amazed”, “grateful”, and “humbled”.

“There’s so many words that can describe it,” she said as her sister pushed a shopping cart filled with toilet paper, eggs, butter, bread and sausage.

As incredible as the support has been, Peter knows it is going to take a lot more to get the community back on its feet. “A week from now, two weeks from now when the news is gone, we still have to live amongst this,” said Peter about the damage from last week.

Other residents are focused on cleaning up and rebuilding the areas hardest hit. Clean-up crews have shown up in south Minneapolis neighborhoods nearly every day since the protests began to collect rubbish and sweep up glass.

The Lake Street Council, an organization that normally focuses on marketing Lake Street and supporting businesses, set up a donation service for businesses damaged by the protests. The fund has raised more than $ 4.9m as of Friday.

According to Allison Sharkey, who has spent the last six years as executive director of the Lake Street Council, the outpouring has been astounding. More than 57,000 investors have contributed. Sharkey told Al Jazeera that they did not have a goal in mind when they started the fundraiser, but “if we had, we maybe would have sought $ 50,000”.

When distributing the funds, the council said it will ensure that the money goes to locally-owned businesses, especially those run by owners of color.

The council is asking itself: “How do we ensure that property stays in the hands of local entrepreneurs – of color especially – rather than investors that are not from this community?” said Sharkey. 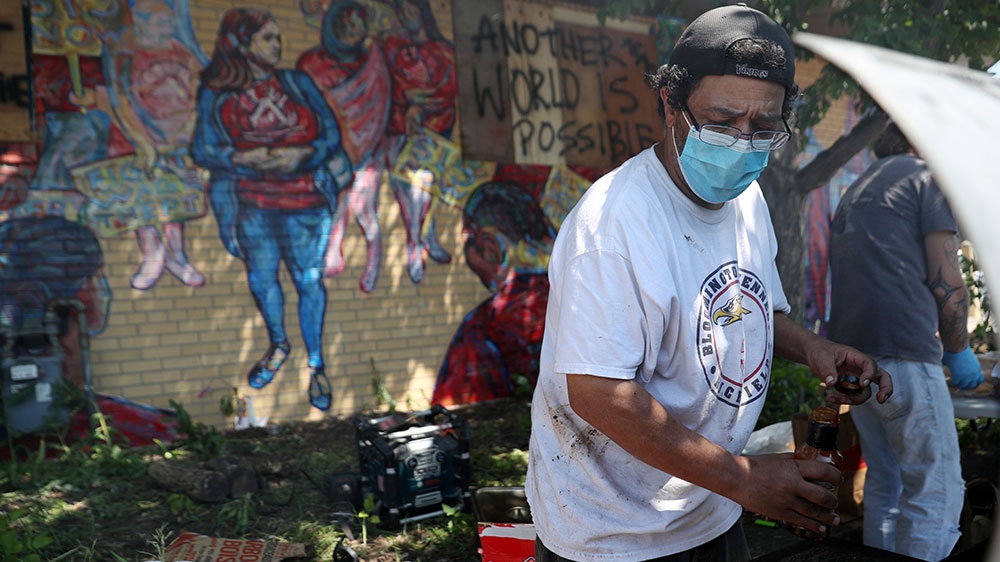 Community member Maurice Hull cooks up free food for people as they gather at a memorial for George Floyd that has been created at the place where he died in Minneapolis, Minnesota [Leah Millis/Reuters]

Other residents have supported protesters by handing out water or offering their homes as places where protestors can charge their mobile phones or use the restroom.

A former hotel was converted into a shelter for the Minneapolis homeless population, whose members had nowhere to go when the curfew began and the police started clearing the streets.

“It feels good to see our community out here, but it’s horrible the circumstances in which we have gathered here today,” said Melissa Ferguson, a south Minneapolis native, on Sunday as she stood by the area where people were handing out food and supplies in south Minneapolis, at the intersection where Floyd was killed.

Footage from earlier today of people unloading food for the community from a U Haul truck outside of the Cup Foods where George Floyd was killed. The site has remained a peaceful place for gathering, demonstration, and the celebration of his life. pic.twitter.com/TulPKLoDq5

A local tagger, who goes by the name Simon, is using his artistic skills to help out. On Saturday, he used a can of spray paint to cover profanity painted on the side of a brewing company. He tagged “Floyd” while a fellow artist sprayed “George” onto another door.

He had started with a friend’s building and word spread to the brewery’s owner. “It turned out really good and I got a really good response from it, so I got invited out today to go walk around and try and do the same thing,” said Simon, who lives down the street. He views his work as a way to bring a more positive outlook to the situation.

Webbie, who started the food pantry pop-up, hopes the work she and others have started will continue long after the protests have ended and stores have reopened.

“It takes away some of the pain, but at the end of the night I still reflect on George Floyd,” said Webbie.

“Here’s the thing,” she added. “A lot of us are always about good. It just takes a situation like this for it to be seen.”