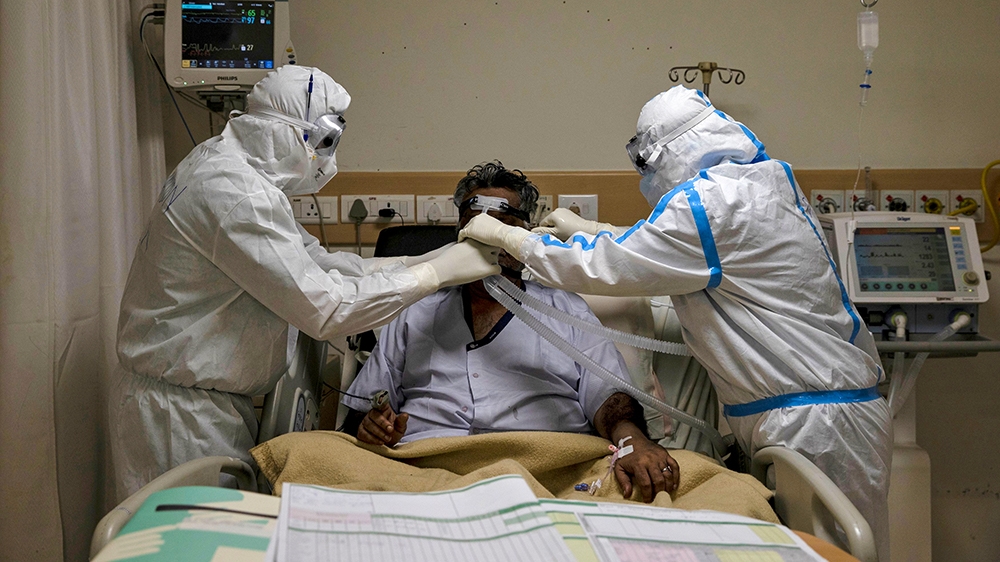 As India reports a record number of coronavirus infections in a single day, the country fragile health infrastructure faces a major crisis: a lack of hospital beds.

On Tuesday, Delhi’s Deputy Chief Minister Manish Sisodia said the capital will have more than half a million COVID-19 cases and it does not have the hospital capacity to handle such an outbreak.

He said the city will need 80,000 hospital beds to tackle the spike.

Sisodia’s warning came as harrowing accounts of people struggling to get a hospital bed in New Delhi emerged, including some who said their loved ones died on the doorsteps of medical centers that refused to take them in.

New Delhi’s number of infected people jumped to 29,943 on Tuesday, more than 10 percent of India’s total cases, making it the third-worst-hit region after Maharashtra and Tamil Nadu states.

“For Delhi this is a big problem, if cases continue to rise,” Sisodia said.

Meanwhile, India on Tuesday registered 266,598 total cases nationwide – making it the fifth-worst-affected country in the world, and set to overtake the United Kingdom in few days – with nearly 7,500 deaths so far.

On Sunday, Sisodia’s boss, Delhi Chief Minister Arvind Kejriwal, had announced that hospital beds for COVID-19 patients would be reserved for the city’s residents.

Kejriwal warned the city would soon run out of beds if COVID-19 patients kept coming from across India to its hospitals, drawing criticism that his decision was unethical.

Kejriwal later tweeted that “making arrangements for treatment for people from across the country during the Covid-19 pandemic is a major challenge”.

“But maybe it’s God’s will will we we have to serve everyone in the country,” he said.

Kejriwal himself went into self-isolation at home after a bout of fever and throat pain, his party said. A coronavirus test was conducted on Tuesday, and the results are awaited.

“He has been a corona warrior, he has been at the front line of this fight, we hope he recovers soon,” said Raghav Chadha, a party legislator.

‘He was dying in front of family’

Aniket Goyal, a university student in New Delhi, said his grandfather was refused admission in six government-run hospitals last week because the facilities said they had no beds even though a government app showed that beds were available.

When his family went to the city’s private healthcare facilities, they found the daily cost of treatment so high, they withdrew.

The family filed a public interest petition in court seeking its intervention. The court set a hearing for the following week by which time the 78-year-old man had died.

“He was dying in front of our family every minute; we could not do anything,” Goyal said.

Another resident tweeted that she was standing outside the government-run Lok Nayak Jayaprakash Hospital with her ailing father, but it was not accepting him.

“My dad is having high fever. We need to shift him to hospital. I am standing outside LNJP Delhi and they are not taking him in. He is having corona, high fever and breathing problem[s]. He won’t survive without help. Pls help, “said the resident, who tweeted under the Twitter handle Amarpreet.

An hour later, she wrote that her father had died and that the government had failed them. The hospital said in a statement that the patient was dead on arrival and that its doctors had examined him.

“The hospital staff is working non-stop for the last several months and are making every effort possible to ensure not a single life is lost,” it said adding these were extraordinary circumstances.

Delhi, Mumbai, Hyderabad, Chennai … Private hospitals turning away corona patients. Public hospitals overcrowded.Thanks to our political class for rotten healthcare system. When did they last speak or agitate on the issue of health policy? And why didn’t we question them?

A Delhi government coronavirus mobile app showed the city of more than 20 million people had 8,814 COVID-19 beds, with more than half occupied.

Of the 96 hospitals listed, 20 had no beds available, the app showed on Tuesday.

The app also tracks the availability of ventilators, and data showed that only 260 of the 519 ventilators were in use.

Mumbai city is the other coronavirus hotspot. A leading official in India’s financial capital told the NDTV network on Monday night that the city’s hospitals had just 30 ICU beds left.

A report by the Indian Express newspaper on Tuesday cited the BMC data as saying 99 percent of Mumbai’s ICU beds and 94 percent of ventilators were already occupied.

The report said Mumbai has 1,094 ICU beds in public and private hospitals, with 1,083 among them occupied. It added that of the 464 ventilators, 437 were already employed for patients.

Meanwhile, the Delhi government has also stopped hotels from reopening as it might want to convert them into temporary hospitals if there is a big jump in cases.

On Monday, India threw open shopping centers and restaurants in a bid to restart the economy after a lockdown imposed in March left millions without work.

But health experts say the country’s coronavirus peak could still be weeks away, if not months.