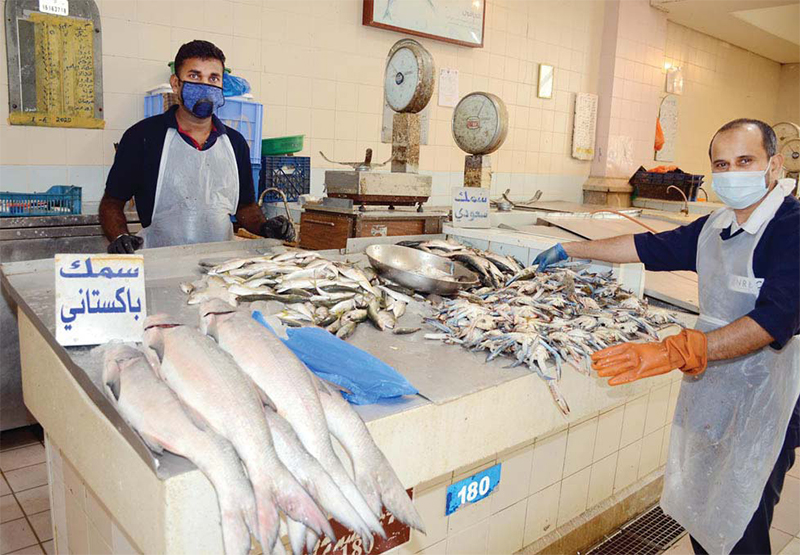 KUWAIT CITY, June 9: In an unprecedented phenomenon that targets fishmongers inside the fish market and prevents them from obtaining their livelihood, parallel markets are now operated by offices selling fish outside the market at high prices to avoid dealing with the stalls inside the fish market at fair prices after curbing the trend in the last period through procedures adopted to limit the spread of coronavirus.

The source confirmed that “powerful” offices get fish directly from the airport or stores to sell to the companies dealing in fish, as well as the parallel markets and hypermarkets, and they deprive traders in Sharq Market and others from obtaining fish unless they pay royalties and bribes ranging from 10 to 20 dinars per carton, while the owners of those offices get 80 to 90 dinars profits when selling outside the market. He said a carton of some types of fish weighing 20 kg is sold for approximately 200 dinars.

He stated that imported shrimp and zubaidi are also sold to people outside the market via mobile vehicles at very high prices in a clear exploitation of the needs of fish lovers, saying the difference between the price of a carton sold in the market and outside is approximately 80 dinars. He noted that opening a market outside the fish market is contrary to laws of the state, so concerned authorities should move to stop this farce.

Fishmongers confirmed that the market is almost empty of consumers, and they can only buy cartons after paying bribes. He wondered if they’re paying rents to sit and open their mouths, adding “some sell fish outside the market in a public challenge to the Ministry of Commerce, so there is no point sitting at the market waiting for customers who will not patronize them as long as there is fish outside”.

They pointed out that fish comes directly from the airport to centers, restaurants, cooperative societies and street vendors at very high prices, and the Turkish fish companies even sell to the companies and parallel markets. “Therefore, we demand the rapid intervention of relevant authorities to impose the harshest penalties against those who cause price hikes to destroy the market, they said.”