Long lines snaked around polling places on Tuesday, and some voters faced hourlong waits as the US state of Georgia held its twice-delayed primary election amid a shortage of poll workers and social-distancing precautions for the coronavirus.

Widespread problems included trouble with Georgia’s new touchscreen voting system. Some voters said they joined the lines after requesting mail-in ballots that never arrived. One state legislator from Atlanta said there was a “complete meltdown” in Georgia’s largest county.

Even before the trouble began, Georgia’s chief election officer officer warned that results may be slow to come in as poll closures and virus restrictions complicate in-person voting and counties work to process a huge increase in ballots received by mail.

“I always vote in primaries, but the political times that we’re having right now, or the moment that we’re having, is scary,” Layla Cantlebary, 39, said as she waited to vote in Roswell, Georgia, outside Atlanta , the state capital.

“With all the civil unrest, it just underscores the importance of coming out and voting for somebody who you feel is going to lead the country to a better place than we are in currently.”

Voters in Georgia are selecting party nominees for US House and Senate races and for state legislative elections to be held in November. Other state and local races are on the ballot as well.

Democratic presidential candidate Joe Biden, who is on the ballot in Georgia, has already won enough support in state primary elections to claim the Democratic Party’s nomination to face President Donald Trump in November.

The long lines were evident shortly after voting began at multiple polling places, including the elementary school where Cantlebary and about 60 people waited.

Cantlebary, 39, said she arrived about 15 minutes before her polling place opened at 7am ET (11: 00GMT) and waited more than an hour. The self-described liberal said she had planned to vote by mail but her absentee ballot never arrived.

In Atlanta, a line of voters wrapped around the block. Several sat on the sidewalk as they waited. Most wore masks. State Representative William Boddie said he visited two polling locations that had long lines in his district. He said lawmakers from other parts of Georgia told him of similar problems.

Atlanta Mayor Keisha Lance Bottoms said voters in line at one of Atlanta’s largest precincts reported all the machines were down. She encouraged voters to stay in line and said poll workers should offer voters a provisional ballot if machines are not working.

“If you are in line, PLEASE do not allow your vote to be suppressed,” the mayor said on Twitter.

If you are in line, PLEASE do not allow your vote to be suppressed. PLEASE stay in line. They should offer you a provisional ballot if the machines are not working. https://t.co/1lVu3rEsCg

Perdue, a close Trump ally, is seeking a second term in November as Republicans look to hold the White House and a Senate majority. He drew no GOP primary opposition.

The race has proven to be anything but predictable, with the candidates forced to do most campaigning online because of the coronavirus. In recent days, the contest was shaped by widespread protests and civil unrest following the death of George Floyd in Minneapolis.

Criticism of the Trump administration’s response on both fronts has added fuel to Democrats’ ambitions of winning in Georgia, where Republicans dominate statewide elections, but Democrats are making gains.

If no candidate receives more than 50 percent of votes, the top two finishers will advance to a runoff on August 11. Other Democrats in the race include former ACLU of Georgia head Maya Dillard Smith, Air Force veteran James Knox and Marckeith DeJesus. 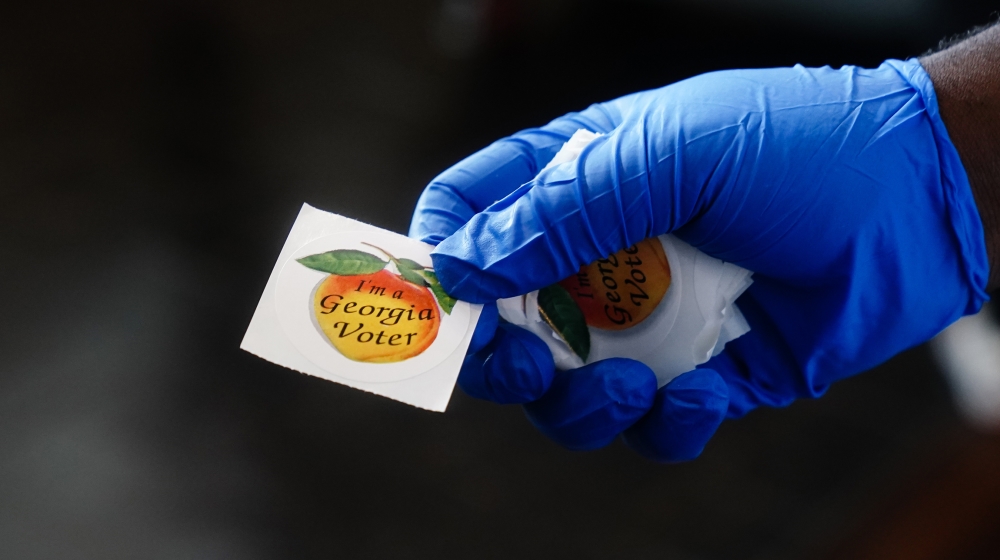 A polling place worker holds an “I’m a Georgia Voter” sticker to hand to a voter on June 9, 2020 in Atlanta, Georgia [Elijah Nouvelage/Getty Images]

Georgia Secretary of State Brad Raffensperger on Monday predicted longer lines. He also said his office won’t begin to release results until the last precinct has closed. He predicted the winners may not be known for days.

“To get a good concept of where we are with the election – who won, who lost, or who’s in the runoff, things like that – I would think that could take upward of a couple days in some of these really tightly contested elections, Raffensperger said.

Georgia postponed the primary twice because of the pandemic. The state’s March 24 presidential primary was first moved to May 19, when voters were set to choose party nominees for other 2020 races. As coronavirus infections and deaths mounted, election day was pushed back again to Tuesday.

Could ‘chaos’ in Georgia polls be a preview of November troubles? | USA News

Analysis: Don’t be fooled by high early US voting numbers