The killing of George Floyd, 46, while in the custody of former Minneapolis police officer Derek Chauvin on May 25 ignited protests across the United States and demands for police accountability and reform.

The initial rage over the death of Floyd, and many others, has settled into indignation and calls to gradually defund the police – using those funds to support job-training initiatives, public health, school counsellors and other aspects of public safety that critics said have been neglected.

For some, the eventual goal is abolishing the police and prisons. Many are left wondering how that reform would work.

Numerous reports have looked to Camden, New Jersey as a possible model for moderate reform, citing a successful drop in violent crime since it shut down its police force in May 2013 in favor of an emphasis on “community policing”.

Policing was not abolished in the city. The Camden County Police Department took over after the police union and department, both run by the city, were dissolved. The county was able to roughly double its police force due to lower salaries.

‘How not to do policing’

While violent crime dropped, some residents think that’s not the best metric to judge success. There are still issues between the county police department, guided mostly by white leadership, and Camden’s majority Black and Latino populace.

“If there’s anything other states should learn” from Camden, Ayinde Merrill, a 25-year-old lifelong resident and organizer with grassroots group Camden Arts for Change told Al Jazeera, “it’s how not to do policing.”

Camden ended its police force partly because of corruption and partly to get more cops on the streets by ending generous union contracts. Cost has been a factor in the few other US communities that have dissolved police forces.

The city has roughly 74,000 residents, or about 17 percent of the population of Minneapolis. Before the police reform, the city saw between 37 and 67 homicides a year between 2010 and 2013, according to the New Jersey State Attorney General. It was widely considered one of the most dangerous cities in the country.

There were 67 murders in 2012, the final year for the Camden city police department. Homicides dropped to 57 in the first year of the new police force, decreasing to 23 by 2017. This was a 32 percent drop, according to local media.

But there are caveats to those numbers. While violent crime decreased overall, there were initial increases in summons for low-level offences, which rights groups have criticized.

The New Jersey branch of the American Civil Liberties Union found that summons for minor crimes increased significantly in the first year of the Camden County Police Department.

They are criticized for disproportionately affecting lower-income individuals who have to miss work or may not have transportation available.

Black residents are over three times more likely to be arrested for cannabis possession than whites, which is the case across the state, according to 2017 figures, even though studies show cannabis usage to be similar across ethnic groups, suggesting issues with race relations remain.

“Their approach is ‘Let’s arrest everybody'”, Merrill said, noting the Camden model does not remedy the problem of mass incarceration.

Minneapolise Police officers stand in a line while facing protesters demonstrating against the death of George Floyd outside the 3rd Precinct Police Precinct, which was later burned. [Kerem Yucel/AFP]

Alexander Shalom, Senior Supervising Attorney at the ACLU-NJ, told Al Jazeera that Camden had made improvements, noting it was one of the most dangerous cities per capita in the US when changes to policing were made.

Shalom said after being made aware of the summons issue, former Police Chief Scott Thomson took steps to lower the number of summons issued.

Camden County officials did not respond to Al Jazeera’s request for comment. Local officials have credited their success to their community-focused policing, which Thomson also emphasizes.

Thomson told Mary Louise Kelly on US radio show all Things Considered that his goal was to change how the community viewed police officers, going from “warrior” to “guardian”. 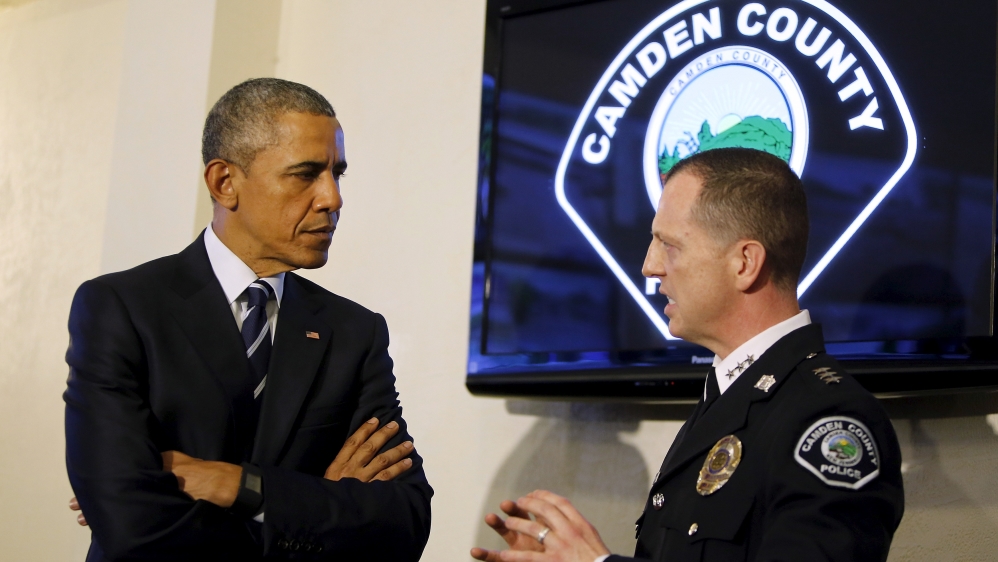 “There’s lots of things to praise”, Shalom said, citing reforms to use of force, which has seen a steep drop in excessive force complaints and an emphasis in de-escalation of violent violent situations.

The department’s openness to engagement with the community is another positive aspect, along with the leadership of former Chief Thomson, he continued.

But there’s still much “to critique … I don’t think you could zoom out and say ‘Camden is a model for what police forces should do’,” Shalom said.

Not good for all

Merrill noted that increases to police on the streets are good for certain sectors of the city, but not for others which still face a lack of funding for needed social programs, such as job training or the arts.

One of the significant failings of the new police force is its lack of reflection of the community, Merrill said. “Frankly, it’s a lot of white officers.”

The city of Camden is overwhelmingly Black and Latino, 42 percent and more than 50 percent, respectively, according to data from the US Census. White people make up about 6 percent of the population.

The police chief is white, and only one of seven captains is Black, CNN reported.

Merrill observed that when the county took over law enforcement, it opened officer jobs to people across the county, which has a total population of more than 500,000. “You see cops … from all these other communities who don’t know Camden.”

The most moving part of today was at the beginning of the demonstration. Local organizer, Ayinde Merrill, declared that he would be wearing a noose for the duration of the event.

“Today, we’re loosening this noose and we’re taking it off,” Merrill said to a crowd of hundreds. pic.twitter.com/286gbrcX85

Camden Arts for Change has presented a list of demands to local officals, including steps to make the police force mirror those it polices.

Merrill said Chief Joseph Wysocki is open to dialogue with the group and that the police is not the only public organization that needs reform.

“It was also a march to put city council and the mayor on notice … we’re fed up, and we need to let them know that,” he connected.

How should US police forces be reformed?

What should be done about America’s policing problem? | US & Canada