Islamabad, Pakistan – Atiqullah did not know what else to do. He spent three days scouring the northwestern Pakistani city of Peshawar for a ventilator for his 60-year-old father, who had tested positive for the coronavirus and was in a critical condition.

“The doctors were trying their best but we couldn’t find a bed in the Intensive Care Unit [ICU], “he told Al Jazeera.” For three days we were trying to get him shifted into an ICU because he was in such a serious condition. “

Ultimately, he found a bed in an isolation ward at the Lady Reading Hospital – the city’s largest government hospital – but there was still no ventilator available.

“There was no space in any ICU, anywhere in the city, not just at Lady Reading,” he said.

Finally, unable to afford to pay for his father to receive treatment at a private healthcare facility, Atiqullah, a 30-year-old hospital orderly, had no choice but to sit at his bedside and watch him die.

Pakistan has seen its coronavirus epidemic explode in the last two weeks, seeing multiple consecutive days of record deaths and case rises across the country, pushing hospitals in major cities to the brink of their allocated capacity.

On Thursday, the country saw 6,397 new cases take its tally to 125,933, with a single-day record 107 deaths taking the death toll to 2,520 since Pakistan’s outbreak began in late February.

The real number of infections is likely far higher, with Pakistan currently testing about 25,000 people a day, which is half the number of daily tests recommended by the World Health Organization (WHO).

In a country that is home to 220 million people and a ramshackle health infrastructure that offers just six hospital beds per 10,000 people, doctors say they fear that the healthcare system could be on the brink of collapse.

“There has not been a single day in the last week where we had a single bed available,” said Dr Naveed Ahmed Khan, a surgeon at Peshawar’s Hayatabad Medical Complex, one of the city’s largest hospitals and a designated coronavirus care facility.

“Only if someone died or was discharged could we replace them with a new patient.”

Peshawar, the capital of Khyber Pakhtunkhwa province, sees a large number of patients coming in from all over the province due to the relatively poor health infrastructure elsewhere, doctors say.

“Our hospital’s condition is already overburdened and the health system is very weak,” said Muhammad Kashif, a doctor at Lady Reading Hospital. “Right now, you won’t find a single ICU bed in all of Peshawar. Our health system, if, God forbid, things remain as they are, it will definitely collapse.”

Ahmed Zeb Khan, a doctor at a government facility in the northwestern town of Charsadda, says doctors have been pleading with authorities to reimpose a lockdown to gain some “breathing space” to increase hospital capacity.

“We have told the government over and over again to increase the capacity of the ICU and isolation wards, because you did not impose a [proper] lockdown and now we have no breathing space, “he said.” Until that happens, the system is overburdened, and we are going towards a collapse. “

In the southwestern city of Quetta, there has been a rapid increase in cases, according to official data.

Healthcare workers in Pakistan are putting their lives on the line as they battle the country increased number of cases.

At least 3,635 healthcare workers have tested positive for the coronavirus since the outbreak began, according to government data. Thirty-five of those doctors, nurses and health staff did not survive.

“Our healthcare workers are exhausted, they have been working for three months straight without a break,” said Peshawar’s Dr Kashif. “The number of doctors that are dealing with coronavirus, there are too little. They need to induct more doctors.”

Waseem Baig, a spokesman for the provincial health department in Quetta, said the two hospitals in the city designated for coronavirus patients were both full.

Doctors in major cities across the country echoed Baig’s concerns, saying their hospitals – both public and private sector – were at or nearing their capacity for coronavirus patients.

The figures, however, can be misleading if seen at the country-level, given that while there are critical care beds available, there appear to be acute capacity shortages in larger cities where the caseloads are higher.

“People generally go towards bigger cities for treatment,” explains Ahmed Zeb, who is also a doctors’ union spokesman. “The burden falls on cities like Peshawar, where the burden is extremely high.”

Currently, the JPMC has room for “two or three” more patients on critical care beds, as they work to add capacity to the system.

Misinformation about the coronavirus has also been a concern for doctors, with at least three incidents of violence reported across the country by angry relatives of patients who died from the virus.

“This is a pandemic and people don’t believe us,” said Jamali, whose hospital was attacked twice in the last month.

“They think that we are getting paid by the WHO to declare deaths as being due to the coronavirus.” 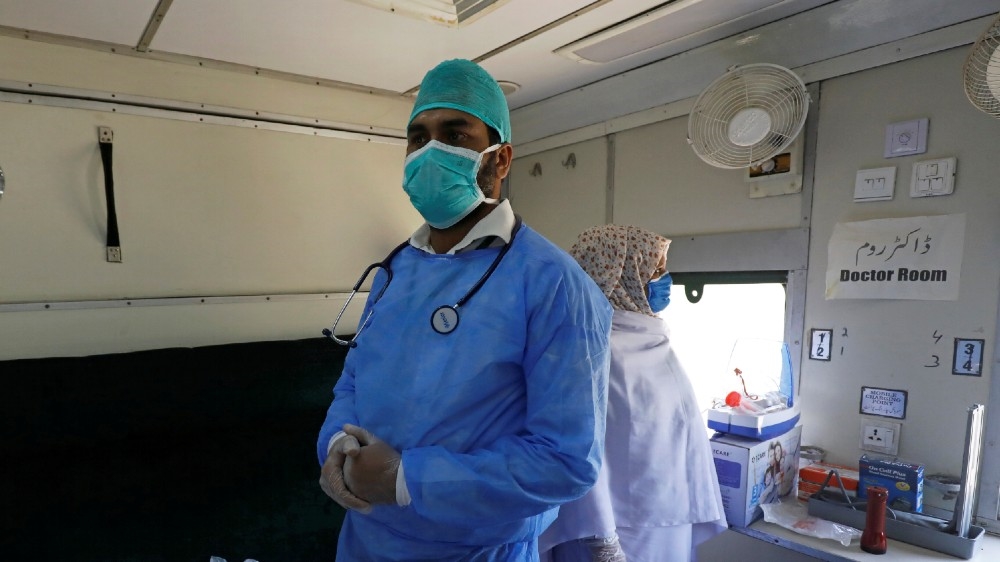 A doctor and nurse wear protective masks as they stand in a passenger train’s car after the government turned it into a hospital and quarantine center, in Karachi [Akhtar Soomro/Reuters]

The countrywide increase in cases coincides with an almost complete lifting of lockdown restrictions by the government on May 22.

“Since the lockdown was ended, right after [the Muslim festival of] Eid we saw the cases rising rapidly, “said Baig.” We saw our first 1,000 cases [in the province] in 50 days, and now we have seen 1,000 cases in just the last three days.

“We need a lockdown, nothing else. People are coming into the hospitals, we don’t know who is infected and who isn’t,” he said.

On June 7, in a letter to provincial authorities in Pakistan, the WHO warned that if a new intermittent lockdown was not imposed, the country could see cases rise to more than 800,000 in July before beginning to level off.

“As of today, Pakistan does not meet any of the prerequisite conditions for opening the lockdown,” said the letter, which detailed six criteria under which such decisions should be taken, including controlling disease transmission, effective contact tracing and community awareness.

On Thursday, however, Pakistani Prime Minister Imran Khan repeated his position that the country could not afford a strict lockdown due to its economic implications.

“Our situation is different from the US, China [and others], because 25 percent of our people are in poverty. So if we do a lockdown, the curse of it falls on the poor. “

PM Khan called on citizens to observe social distancing guidelines to control the spread of the virus but also issued a warning.

“In the coming days, sadly I must say, that the number of deaths will increase in Pakistan.”

Epidemiologists say Pakistan will have to find a solution that incorporates its limited capacity for imposing lockdowns and inadequate healthcare infrastructure.

Dr Adnan Khan, a public health researcher and infectious disease specialist, says Pakistan needs to implement higher rates of testing, and more effective testing of contacts of coronavirus positive patients. The WHO has assessed Pakistan’s isolation, tracking and testing regime as being “weak”.

Moreover, he said the authorities could maximise the current capacity in the system by only admitting patients to hospital who are in need of critical care, freeing up space to increase the capacity for such beds.

“You need to do triage,” Khan told Al Jazeera. “Do basic intake, check their fever and oxygen stats, and then you turn away anyone who is dealing reasonably well, and check in with them again the next morning.

“There is a capacity that even now can be expanded by three to four-fold if it is done rationally.”

It is that lack of space in the system that appears to be contributing to higher rates of deaths, particularly in major cities like Peshawar.

“[If things continue like this] they will not be able to handle it, “said Atiqullah, hours after burying his father.

“The resources were there to prevent the spread of the virus, but the problem was the ICU,” he said. “The problem that there is no space.”