Far-right protesters clashed in London on Saturday with anti-racism demonstrators and police trying to keep the two sides apart after they rallied in London in rival demonstrations, despite strict restrictions and warnings to stay home to contain the coronavirus.

Fights broke out between groups outside London’s Waterloo station, with fireworks thrown before police cordoned off areas. On a nearby bridge, stones were lobbed at police. Sporadic skirmishes continued in central areas.

Commenting on the incident, British Prime Minister Boris Johnson said in a Tweet: “Racist thuggery has no place on our streets. Anyone attacking our police will be met with the full force of the law.”

Racist thuggery has no place on our streets. Anyone attacking the police will be met with full force of the law. These marches & protests have been subverted by violence and breach current guidelines. Racism has no part in the UK and we must work together to make that a reality.

Demonstrations have been taking place around the world and in parts of the United Kingdom over the death of African American George Floyd in Minneapolis last monht after a white policeman knelt on his neck for nearly nine minutes.

London’s Metropolitan Police, which kept the rival groups apart, said the protests were largely peaceful with “pockets of violence directed towards [police] officers “.

It said 100 people were arrested for offences including “violent disorder,” assault on the police, possession of a weapon and drunkenness.

In the UK, a debate is raging over monuments to those involved in its imperialist past, especially after the statue of slave trader Edward Colston was torn down and thrown into the harbor of Bristol port last weekend. In London, a statue of Winston Churchill was daubed with the words “was a racist”.

In and around Parliament Square earlier on Saturday afternoon, hundreds of people wearing football shirts, chanting “England, England”, and describing themselves as patriots, gathered alongside military veterans to guard the Cenotaph war memorial.

“Winston Churchill, he’s one of our own,” they chanted, near his statue.

A few kilometers away, anti-racism protesters gathered at Hyde Park, holding Black Lives Matter placards, even though organizers had told them not to attend, fearing clashes.

Police had separated two groups of about 100 people each in Trafalgar Square, one chanting “Black Lives Matter”, and the other racial slurs. Some groups jostled, tossed bottles and cans and set off fireworks, as riot police lined up.

“Clashes erupted between the police and the right-wing protesters who have come out as advertised to protect the national monuments in Parliament Square, in the words of the leader of the group Britain First, one of the organisers,” he said.

“In Trafalgar Square in central London, a group of rival Black Lives Matter protesters are being protected by the police,” Hull added. 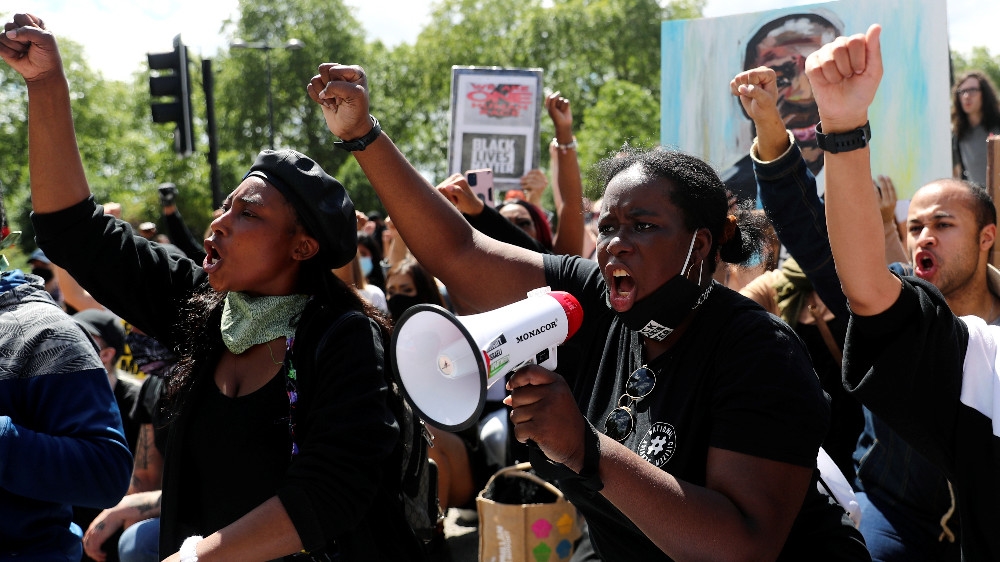 Hundreds of people also attended rallies in northern English cities like Liverpool and Newcastle, with many protesters donning masks due to the coronavirus pandemic.

Police said on Saturday that some people were bringing weapons to the London rallies. They imposed route restrictions on both groups and said rallies must end by 5pm (16:00 GMT) in a bid to avoid violent clashes.

“Anyone who thinks they can commit a crime or vandalise property will be arrested,” Commander Bas Javid said in a statement.

Kazakh police detain do do of anti-government protesters | News