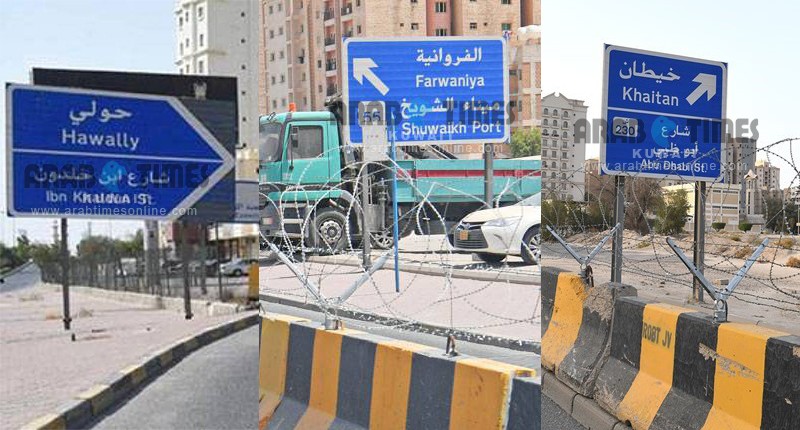 KUWAIT CITY, Jun 13: With constant evaluation and check on health conditions in the isolated areas, it appears that the Hawally region has come closest for isolation to be lifted first based on the results achieved with regard to the scale of infection and low percentage of infected people based on daily smear test for coronavirus.

Informed sources said that positive indicators are still being achieved in the isolated areas according to the results of the evaluation expected to be submitted to the Minister of Health stating that the Hawally region is at the forefront of the areas that registered positive indicators and indications are strong that isolation will be removed from this area, but the decision remains entirely on subject to what it will produce the latest evaluation results, and the extent to which the numbers and rates of infections have been consistently proven.

Regarding the health conditions in the rest of the isolated areas with the end of the first phase of the return to normalcy plan, the sources said that Mahboula and Jleeb Al-Shuyoukh regions despite of some positive indicators were achieved, they are still the highest areas in terms of the scale of transmission and infection rates to the proportion of smears, while the situation is better in the areas of Farwaniya and Khaitan, but indicators are not in favor of lifting isolation, therefore it is likely to continue for some time .

Based on the data, sources expected that removal of isolation from these isolated areas will be in 3 stages, the first includes the Hawally region which has show satisfactory results while the second includes the regions of Farwaniya and Khaitan where as in the third and last stage include the regions of Jleeb Al-Shuyoukh and Mahboulah.

In the daily figures, the Ministry of Health recorded decrease in the total number of cases of COVID 19 cases in the country to 514 cases , where active cases were 9,295. 834 people recovered bringing the total to 25,882.
With 4 deaths fatalities reached to 289.

While Kuwaitis remained at the forefront with 281 cases (54.6 percent) of the reported infections, 17 cases were recorded in Al-Ardiya, Sabah Al-Nasser and Sabah Al-Salem, 16 cases in Abdullah Al-Mubarak, 36 in Al-Farwaniyah, and 29 in Jleeb Al-Shuyoukh, in the list of highest regions for infections.

Second stage plans: Lifting of isolation from Mahboula and Farwaniya; curfew period to be reduced

Decision on lifting isolation on Thursday – Mahboula alongside with Hawally

Isolation ends for Khaitan and Hawally; New curfew timing 7 pm to 5 am from Sunday