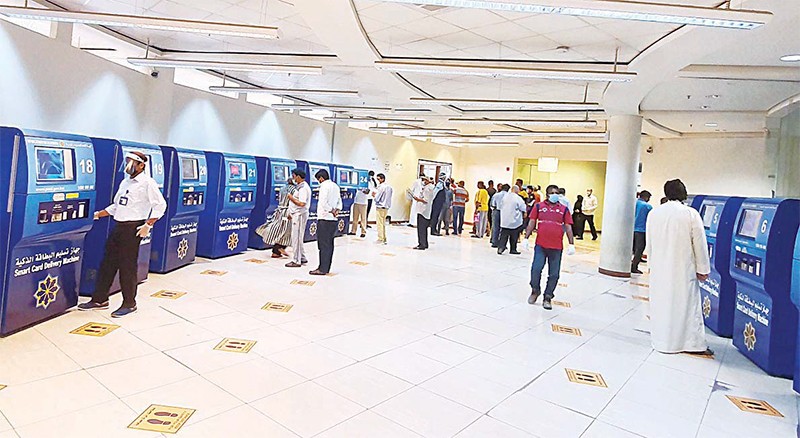 KUWAIT CITY, Sept 10: Compensating for the downtime of the corona crisis and keeping pace with severe crowding, Public Authority for Civil Information (PACI) started working for 12 hours – from six in the morning to six in the evening – to deliver the “ready cards” at a rate of 15,000 cards a day compared to 12,000 issued last week.

This indicates the end of crowding in the authority in just 45 days, according to the Director of Production and Distribution Department at the Public Authority for Civil Information Jassem Al-Mithen, reports Al-Qabas daily. Al-Mithen said the authority had given priority to cards of citizens and domestic workers over the past two months, as it issued 113,000 cards for Kuwaitis and 123,000 for domestic workers – in addition to completing the issuance of pending cards whose owners had submitted renewal requests in March, April and May, indicating the existing cards are for June 19 onward.

He reaffirmed that the rate of issuing 15,000 cards per day will contribute to ending the delay in issuance of the remaining cards within 45 days, calling on the owners of 211,000 cards piled up in the machines distributed across the headquarters, Jahra, and Ahmadi buildings to collect them without further delay.

Delay
He pointed out that the delay in issuance was as a result of the closure witnessed during the coronavirus crisis, “but we’re able to issue 450,000 civil ID cards within two months, since July 8 until now, and of which 277,000 have been delivered.” He noted the efforts of the authority, with the support of its Director General Musa’ed Al-Asousi will end the delay in issuance of cards after increasing the delivery period to 12 hours. He indicated the authority is investing the weekend to intensify the issuance of civil cards, and “at the end of last week, it issued and stored 30,000 cards over the weekend instead of beginning of the week to avoid congestion that usually occurs on Sunday.”

He stated that “29,000 cards were handed over last Sunday and Monday, and on Monday, 5,000 people received their cards until 11 in the morning. The number doubled at one o’clock in the afternoon, and reached 15,000 at the end of work” and about one thousand cards are delivered between 6 am and 8 am daily. He expected that civil card delivery services through home delivery will contribute to resolve the problem of card accumulation and failure of their owners to attend to them.

Members of the General Department of Special Forces regulate the entry of visitors – whether to receive cards or to complete other transactions according to advance dates, as they spread inside the corridors of the authority and devices for the delivery of domestic labor cards separated from other devices in order to achieve the health requirements.

The same procedure is implemented at the reception halls and floors to avoid motion, as it happened at the beginning of the resumption of work two months ago. The authority has given priority to domestic workers’ cards, as they are not included in “My Identity” application – with the allocation of eight machines for this purpose, but their sponsors are not coming to collect them. Jassem Al-Mithen revealed that the Public Authority for Civil Information was able, within a record time, to operate the Ahmadi unit to deliver cards and transfer a set of machines to the program, then equipped the offices and employees to serve the residents of Mubarak Al-Kabeer and Al-Ahmadi governorates, as it took them one week to prepare.

PACI Calls On People To Collect Their Civil IDs

One thought on “‘PACI working for 12 hours, to end crowding within 45 days’”