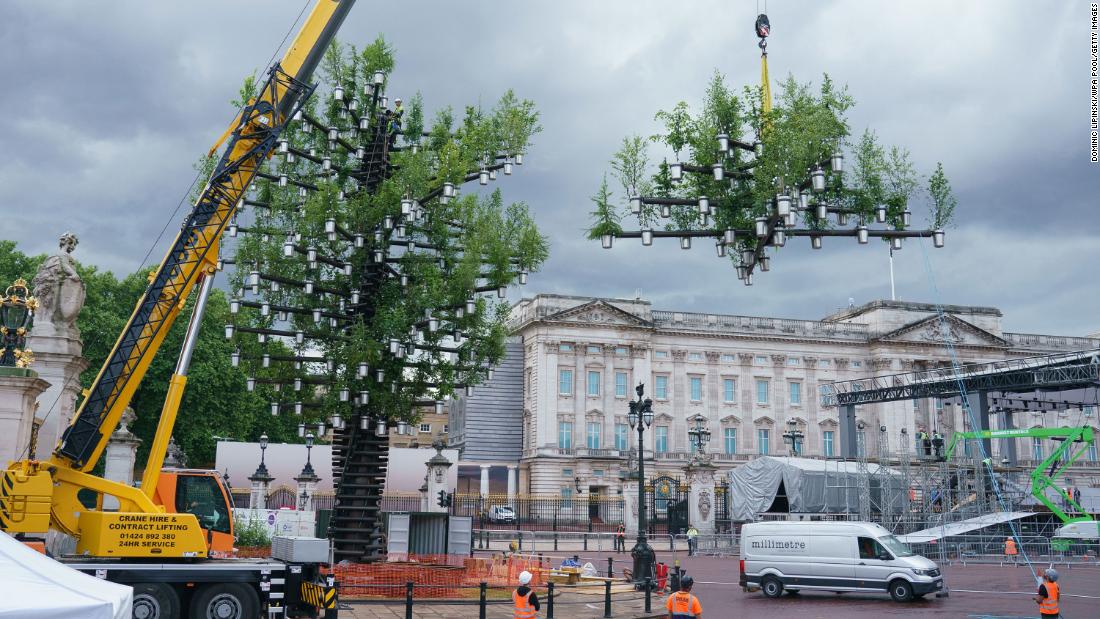 Written by Megan C. Hills, CNN
Outside Buckingham Palace in London, a towering “Tree of Trees” has been erected as part of the Queen’s Platinum Jubilee celebrations. The sculpture, made of 350 smaller trees and plants, was designed by British “starchitect” Thomas Heatherwick and will serve as the centerpiece for one of the celebration’s key events — the lighting of beacons across the UK to honor the British monarch’s 70 years of service.
Decoding the Queen’s colorful style
The 69-foot tall “Tree of Trees” comprises hundreds of indigenous British species ranging from hazel to field maple trees — each planted in aluminum pots decorated with the Queen’s cypher.
According to Buckingham Palace, the installation aims to “put the importance of trees and nature at the heart of (the Jubilee)” and the Queen’s global tree planting efforts over her seven decade reign. It also reflects a recent tree-planting initiative by The Queen’s Green Canopy, that led to one million trees planted between October 2021 and March 2022.
A team of workers add the final parts to the “Tree of Trees.” The sculpture which will stand outside Buckingham Palace for the duration of the Queen’s Platinum Jubilee celebrations in June. Credit: Dominic Lipinski/WPA Pool/Getty Images
The sculpture has been divisive on social media since its unveiling last week. One user wrote that the design was “absolutely beautiful,” while another likened it to resembling a “cell phone tower.”
The “Tree of Trees” has also drawn comparisons to London’s much maligned artificial hill, the Marble Arch Mound, a temporary visitor attraction that was widely criticized on social media. Marble Arch Mound was designed to inject more nature into the city but was seen to have completely missed the mark. Some users similarly believe the ‘Tree of Trees’ bears little resemblance to a tree.
Replica of Hong Kong’s ‘Pillar of Shame’ unveiled in Norway
The Guardian’s architecture and design critic, Oliver Wainwright, wrote that the installation looked more like a “massively over-engineered structure” than a recreation of anything in nature.
Heatherwick had previously described it as an “an honor” to have created the installation and The Queen’s Green Canopy called the sculpture a “message of hope, regeneration and optimism to the nation and the world,” in a tweet. Buckingham Palace said that the trees would be gifted to organizations and community groups following the Platinum Jubilee, allowing them to be subsequently planted rather than thrown out.

The design consists of 350 native British trees planted in aluminium pots, which will be donated to community groups after the Jubilee celebrations. Credit: Peter Nicholls/WPA Pool/Getty Images
This evening, Queen Elizabeth II is set to light up the “Tree of Trees” remotely from Windsor Castle. According to a press release from Buckingham Palace, the Queen will first be presented with the “Commonwealth Globe of Nations,” a globe set with platinum, diamond, gold and silver elements and featuring stones collected from the United Kingdom’s highest mountains.
Princess Diana’s ‘priceless’ wedding tiara exhibited for the first time in decades
After she symbolically touches the globe, it will light up and trigger the illumination of Windsor Castle’s famed Round Tower and Quadrangle lawn, and then the “Tree of Trees” over 20 miles away. More than 1,500 beacons are then set to light up across the UK, Commonwealth countries and other territories overseas.
Archival photographs throughout the years will also be projected onto the palace’s facade as the sculpture glows and Prince William is expected to represent his grandmother at the London ceremony.

Es Devlin unveils Forest for Change, an installation of 400 trees at Somerset House