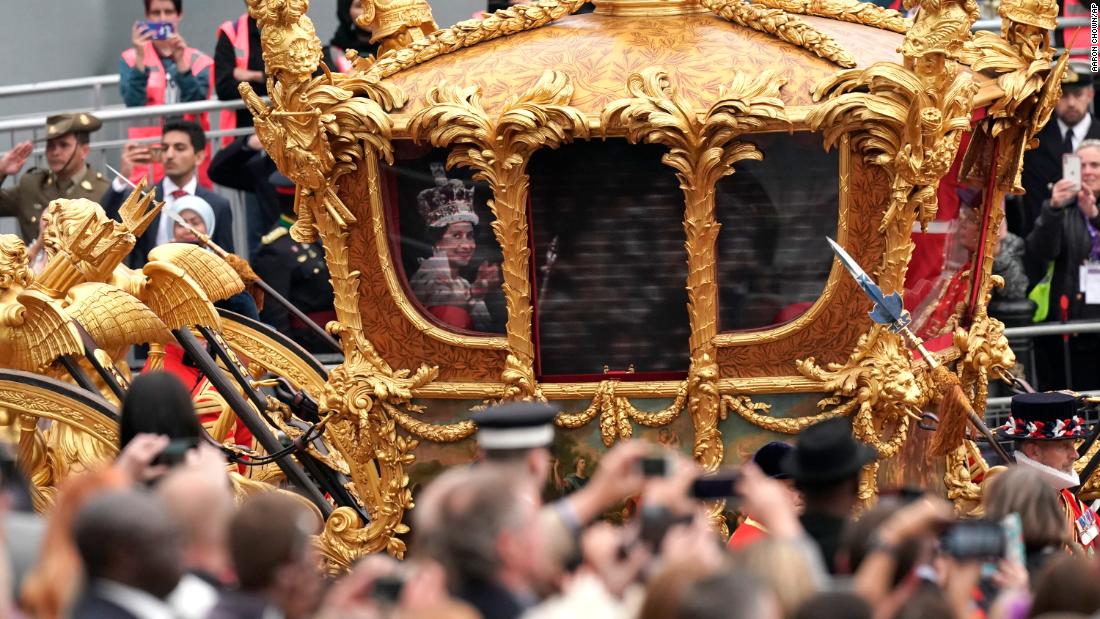 Written by Ziyu Zhang, CNN
An opulent 260-year-old gilded carriage hit London streets again for the first time in two decades, beaming a hologram of a young Queen Elizabeth II.
The Gold State Coach, which first transported the 96-year-old British monarch from Buckingham Palace to Westminster Abbey on her coronation day in 1953, led a spectacular procession on the streets of London as part of the Platinum Jubilee pageant on Sunday.
But the Queen herself was not on board during the pageant. Instead, archival footage of her waving from the coach on the day she was crowned was projected onto its windows.
Detailed shot of the Gold State Coach at the Royal Mews in Buckingham Palace on May 6, 2022. Credit: Pool/Getty Images
Built over the course of two years and completed in 1762, the Gold State Coach is the third oldest surviving coach in the United Kingdom. Four restorations over the centuries have left at least seven layers of gilding and retouching on its body.
Adorned with ornate sculptures of cherubs and tritons, as a show of national unity and strength, and featuring panel paintings, the eye-catching coach is moving work of art. Inside, it’s equally detailed and upholstered with velvet and satin.
Designed by Sir William Chambers, the architectural adviser to King George III, and built by coachmaker Samuel Butler, the vehicle is around 23 feet long, 12 feet tall and made of gilded wood. Weighing over four tons, it is only ever drawn by eight horses at a walking pace.
Every artistic detail of the coach pays tribute to the history of Britain. A massive triton figure is sculpted onto each wheel as a show of imperial power, according to The Royal Collection Trust. Its body is adorned with palm trees and lion heads alongside other motifs celebrating British naval victories. And one of its front panels features the figure of the helmeted warrior Britannia.
Queen Elizabeth II in the coach during her coronation in 1953. Credit: Universal History Archive/Universal Images Group/Getty Images
“Everywhere you look, in the golden sculptures and painted panels, in the uniforms of the postillions, grooms, footmen, attendants and mounted guards, there is rich tradition and history,” Adrian Evans, the jubilee’s pageant master, was quoted as saying of the coach’s design on the royal family’s website.
The famous carriage made its first grand outing for the State Opening of Parliament in 1762 under George III and then was used at coronations and other major royal ceremonies until Prince Albert’s death in 1861. King Edward VII revived its use at his coronation in 1902.
Queen Elizabeth II is seen riding the Gold State Coach from Buckingham Palace to St. Paul’s Cathedral in London during her Golden Jubilee in 2002. Credit: Colin McPherson/Corbis News/Getty Images
Elizabeth II wasn’t entirely impressed when she rode in the coach during her coronation, recalling it was “not very comfortable,” and that it was “not meant for traveling in at all,” in a 2018 BBC documentary. Since then, the Queen has only appeared in it twice — for her Silver Jubilee in 1977 and the Golden Jubilee of 2002. The coach is normally on public display at the Royal Mews.
The Platinum Jubilee pageant marked the finale of the four-day weekend honoring Britain’s longest-reigning monarch. The celebration brought a wealth of street parties, special exhibitions and showstopping parades, with more than 10,000 performers taking part.
“It will be a unique spectacle,” Evans said of the coach’s role in the pageant ahead of the event, and added that it would “set the tone for the very many spectacular sights to come.”
This story was updated to reflect details after Sunday’s pageant was underway.
Top image caption: An image of the Gold State Coach at the Platinum Jubilee pageant.
CNN’s Zoe Sottile contributed to this report.

‘Massively over-engineered:’ A tree sculpture for the Queen’s Jubilee celebrations gets mixed reviews